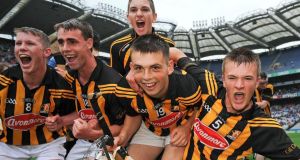 It took 20 minutes longer than they would have liked, but the Kilkenny minors booked their place in the All-Ireland hurling final by dethroning champions Waterford.

Alan Murphy led the way for the Cats, shooting 11 points, but it was John Walsh’s extra-time goal that sunk the Deise. Gathering a breaking ball, Walsh set off for the Hill 16 goal and didn’t break stride until he booted his 75th minute shot to the net.

The goal came in the middle of a sparkling spell for the Cats, who needed a last-gasp Murphy 65 to force extra-time. Once they got it, however, they outscored Waterford by 1-7 to 0-1 in those 20 additional minutes.

Early scores from Alan Murphy, Liam Blanchfield and Sean Morrissey got Kilkenny into their stride. Waterford’s charge was led by Andy Molumby and Cormac Curran, but after 15 minutes they trailed by four as Murphy (free), Ronan Corcoran and Morrissey added points.

Kilkenny could have stretched their lead even further but for some sloppy wides. Waterford should have forced their way back into the game when Curran cut inside but rolled his shot just wide.

Conor Browne and Billy Ryan pushed the gap out to five points (0-9 to 0-4) by the 23rd minute. Waterford crept a little closer thanks to captain Shane Ryan and Colm Roche, but Alan Murphy’s fourth point of the half left Kilkenny four clear at the break (0-10 to 0-6).

Waterford were all square thanks in part to Shane Bennett’s 33rd minute goal. Alan Murphy and Patrick Curran were on-song for their sides through frees, but extra-time was required to decide the game as they finished 1-13 to 0-16. Kilkenny edged in front with Murphy (free, 65) and Liam Blanchfield to the fore (0-19 to 1-14). The Walsh goal was a killer blow for Waterford, who then leaked more points to Blanchfield (2) and Murphy.