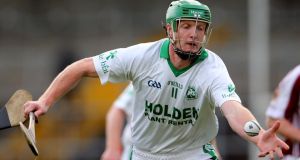 Henry Shefflin: “Over the weekend, it re-acted a small bit. I was in to see the surgeon yesterday and that’s why I’m back in the boot today. I have a bit of a stress fracture in my foot. It’s not the original injury.”

Product launches aren’t the usual platform for significant news but in answer to the first question at yesterday’s Lucozade Sport Club Crusade promotion, Hurler of the Year and record All-Ireland medal winner Henry Shefflin got straight to the point when asked if he’s going to make Kilkenny’s opening Leinster hurling championship fixture, against Offaly on June 9th.

“It’s not very likely at the moment. You came on a good day, to be honest, lads, because basically I was back doing a bit of training for the last couple of weeks since I got the pins out.

“Over the weekend, it reacted a small bit. I was in to see the surgeon yesterday and that’s why I’m back in the boot today. I have a bit of a stress fracture in my foot. It’s not the original injury.

“With the injury I had, my foot wasn’t on the ground for three or four months so it’s over-training basically. Not over-training . . . just your foot isn’t used to training and it just reacts. I’m back in the boot now for another few weeks so it doesn’t look like it, unless they play me full-forward.”

This latest setback is a reaction to Shefflin’s comeback from a more serious injury, sustained in a club match last November when he acquired a fracture in the Lisfranc joint complex (the mid-foot area), which has kept him out for the entire league.

Metatarsal area
The new problem is a stress fracture in the metatarsal area, which can entail an absence of up to anything between six and eight weeks. Does that mean the potential semi-final against Dublin or Wexford is also in jeopardy?

“I don’t honestly know myself so I can’t say. It’s going to be very much a ‘wait and see’ and once I get back I have to be careful again and just build it up right. It’s positive that it’s not the original injury, which is a serious injury and that looks good.”

Either way it appears as if the remarkable sequence of having started every one of Kilkenny’s last 62 championship matches ever since his debut against Laois on June 20th, 1999 – which was also Brian Cody’s first championship fixture as manager – will end.

Shefflin doesn’t appear too bothered by this – within reason.

“Ah no, I’m not going to lie and say I wouldn’t love to play in it. Of course I would. But I would have said it this time last year, there’s no point in playing unless you’re right. And I’m not right so there’s no point, that’s basically it.”

Injury has been a constant in his career, more or less since he did his cruciate in the 2007 All-Ireland final, but with impeccable timing that and sundry other ailments have all cleared by the beginning of the championship. Does he think that all of those winters in rehab have helped to keep him fresh for summer action?

“I don’t honestly know that. That’s a hard one. Obviously I’d love to be playing, that’s what I want to be doing because you do a lot of training to try to get yourself back up to speed and you do a lot on your own rehab wise. I suppose from a mental point of view you’re not playing matches, which can be draining enough.”

He’s not apprehensive about the cumulative impact of injuries.

“Not really. With modern surgery its amazing what they can do. In years to come maybe, but I have had too much success to be worrying about that. This is what I love doing and what I gets kicks from.

‘Works both ways’
“The way last year turned out for me, would it have been as enjoyable if I didn’t have all the stuff that went before it? Probably not. It works both ways so I don’t really think about that stuff. I love playing and training. You look at the short term.”

And last year was a blast. Having come back from a shoulder injury and started the championship slowly, Kilkenny eventually retained the All-Ireland with Shefflin not alone winning a record ninth All-Ireland medal but dragging his team through what was a fitful campaign to the extent that he won a third Hurler of the Year award.

“I said it at the time that it was a special year, the way the whole summer transpired because obviously I had the injury and was struggling a bit and struggling for form a bit and then it just blossomed for me from there.

“That was a special one for myself – to win the Hurler of the Year 10 years after my first – and the whole year. The way Kilkenny were just gone after the Leinster final and next thing, it started to come, started to come and then finished with a buzz. That’s sport. That’s why we play – to get that buzz.”
The Lucozade Sport Club Crusade offers adult sport clubs free training equipment and kit in exchange for Lucozade Sport bottle caps. A bespoke catalogue has been developed so that clubs know exactly how many caps they need for each item. Clubs will be sent the items once the specified amount of caps have been collected and verified. Clubs can register from June 24th on www.lucozadesport.ie.