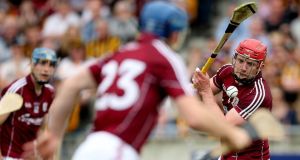 ‘The game that keeps on giving,” Dónal Óg Cusack enthused on The Sunday Game after the frenetic finish to last Sunday’s rollercoaster ride that was the Leinster hurling semi-final.

What a finish to a game that looked over as Kilkenny took control in the final quarter and it seemed as if it would be a damage limitation exercise for Galway But the inevitable didn’t happen and the unexpected came to pass. The heroes are still the heroes.

Two spectacular points in quick succession from two special players, Henry Shefflin and Joe Canning, ensured that there will be an Act 2. We are very lucky to have another day out to get some more from the game that’s always giving.

So is the momentum with Galway, who refused to die when death seemed to be the only option? Or is tradition the overriding unwritten determining law which favours Kilkenny? Galway needed this performance to show the unbelievers that they have the players to be as good as they were in 2012 – if not better.

They also needed to prove to themselves that they have the ability and drive to be considered as realistic contenders.

Kilkenny have done enough this year to drag themselves back to the top table. However, Sunday’s final quarter capitulation tarnishes the aura of invincibility quite a bit.

The good news though is that the hurling year has carried right on from where it finished last year.

Even the bookies will need some new formula or software to predict odds based on form in future if the past few games are anything to go on.

In Munster, hot favourites Cork should have been beaten by Waterford the first day out. In the replay they were like a different team and were much too good for the Déise.

In the next game Clare were clear favourites but were well beaten by a fired-up Cork.

In Leinster, Galway were unbackable against Laois in their first championship game but were extremely lucky to have won. They went in as underdogs against Kilkenny but ground out a very creditable draw.

There is so much uncertainty, surprise and intrigue in this, the most artistic of team sports, that we are almost expecting the unexpected to happen again this year.

But what exactly is hurling giving? As a spectacle is there a better sport?

These amateur players are investing so much of themselves in an effort to be the best they can be. They are stronger, faster, fitter, more skilful than hurlers have ever been. Consequently we have faster, harder-hitting, higher-scoring games. The speed of execution is so fast and so many movements happen in such small timeframes that many of the subtleties are missed.

It certainly is providing us with many high-scoring games. Last Sunday, Kilkenny and Galway shared eight goals and 38 points. In their previous outing Kilkenny scored 5-32 against Offaly. In both of last year’s All-Ireland finals Cork scored 3-16 but failed to win either game. Clare scored 5-16 to make sure of victory in the replay.

It seems that a team should now be aiming for 20 points per game to have a chance of victory. Goals are always welcome of course.

In the dim and not so distant past when the hurling league began in the autumn we often witnessed teams going through the motions. There was very little, if any, training at that time of the year. The players just turned up and played and went back to “wintering well”.

These days there is very little down time for the players. The majority of serious top-class intercounty players are in good condition all year round.

This year we had a keenly- contested Allianz Hurling League from the off. On the opening weekend champions Clare welcomed Kilkenny to their patch and the teams served up a top class performance even though it was only February. The excitement and finish on the final day was testimony to what we’ve come to expect from these elite athletes. Yes, this hurling is a game that’s giving .

The hurlers’ equipment has improved considerably. Gone is the day when you got a hurley out of the communal bag and played away. Back then you examined the grain to make sure that it curved nicely, did a bit of bending of the weapon and if there was a modicum of flexibility evident it was probably okay. Nowadays each hurler’s stick, hurley, hurl, camán, (call it what you will ) is custom-made. All to ensure that the player can’t blame his tools when he mishits a shot.

No, the hurler is leaving nothing to chance in his effort to perform on the big day. He wants to ensure he has all the boxes ticked in his effort to contribute to this game that’s always giving.

It will be interesting to hear Sky television’s review of the hurling year at year end. Surely they’ll be a new fan base by then even though the early viewer numbers mightn’t reflect that yet. Whatever about the international numbers, the indigenous audience appreciate the game.

Tullamore is the venue for the next instalment tomorrow evening. It’s a pity the Leinster Council weren’t a little more giving. Their decision not to allow live television coverage of the replay is disappointing.