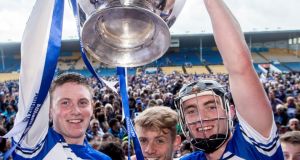 Follow that. Waterford began winning on a dark February evening when the hurling world wasn’t paying much notice and this morning, they finish the league as the only unbeaten team in the country.

It is a brilliant story and leaves everyone curious as to what Derek McGrath’s team will do next. Even before Kevin Moran made his way to the dressing room with the silverware, the manager was torn between saluting a brilliant spring season and tempering expectation. Can they follow this up with a Munster title? He simply doesn’t know.

“I’m not going to be a hypocrite and say we’re ready to win a Munster Championship. There are huge improvements to be made. I’ll reference the first point I made, which was when that flat day or when the de-motivation comes, how we react to that will tell.

It was true that there were audible Waterford groans at times yesterday at the long and sometimes hopeless ball sent in towards the lone, foraging figure of Maurice Shanahan.

But the collective – the work rate and covering, the dominance in the air of Darragh Fives and Austin Gleeson and the overwhelming sense of a team knowing how they want to play – got them excited too. Winning this league was not in Waterford’s plans when the season began. They just came up with a game plan and it has worked.

“I’d be lying if I said I envisaged being here. I think what we tried to do was ride out the storm, ride out all the criticism that was there after the changes were made to the panel, keep our heads down and try to change as a management in terms of sensitivity.

“I think Waterford will be at a stage to play more open hurling in a year or two – it’s not as if it’s not a plan; we feel we have a plan in place. We were building confidence by being relatively, I won’t say defensive, hard-working.

“We or someone else will tweak it in years to come. There will be a forward line capable of flamboyance in Waterford in a few years when the likes of Patrick Curran, Shane Bennett. those are the leaders of the team.”

For the Cork players, this final might have been a sneak preview of their championship engagement. Stephen McDonnell spent much of the game covering in front of Shanahan, having no Waterford man to mark.

“I suppose I am more of man-marker type of fella. First half, I played out wide then I was out in the half back line. It was pretty different all right . . . they clogged their back line but in doing so created space. They had a lot of men around the middle and picked points off.

“There was a lot of things that they did right that we didn’t do right and we will learn a lot from that. It is up to us whether we treat it as a blow or as a blessing. Me for one, I am definitely going to treat it as a blessing. I learned a hundred per cent from that game and that is the way I am going to look at it. I know the lads are the same.”