Cork leave nothing to chance in emphatic win over Waterford

Jimmy-Barry Murphy’ side set up semi-final meeting with Clare 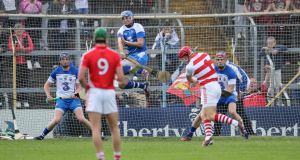 Cork 0-28 Waterford 0-14: Cork are through to a Munster senior hurling championship semi-final meeting with Clare next Sunday after they demolished Waterford by 14 points in this afternoon’s provincial quarter-final replay in Thurles.

Jimmy Barry-Murphy’s outfit were much improved from a fortnight ago against a Waterford side that struggled to match their impressive levels from the drawn encounter.

The writing was on the wall for Waterford at half-time as they trailed by 0-5 to 0-14 and the second half was simply about keeping the scoreboard ticking over from a Cork viewpoint.

The rampant Leesiders, beaten Munster finalists in 2013, will now meet Clare in a repeat of last year’s classic All-Ireland finals.

Cork finished with 10 different scorers against a deflated Waterford, who hit 15 wides over the course of the 70 minutes.

And there was a welcome return for Paudie O’Sullivan from the horrific leg break he suffered last year, with the Cloyne hitman collecting two points from play.

In front of 22,093 spectators, the first half had finished in a welter of excitement as Cork were awarded a 34th-minute penalty for a foul on Pa Cronin, after the Bishopstown player had forced a superb save from Stephen O’Keeffe.

Anthony Nash came forward from the Cork goal to take the penalty but was denied by the onrushing O’Keeffe, who had advanced past the 13 metre line to meet the Kanturk shotstopper and smother the drive.

Bill Cooper lashed over the rebound but a mass melee ensued involving a number of players and shortly after, Lorcán McLoughlin was booked for an off the ball incident involving Austin Gleeson, with Waterford fans screaming for a red card.

It capped a first half that wind-assisted Cork dominated for the most part, after the sides were level three times in the opening 14 minutes.

But unlike the drawn encounter, the Rebels started much better and when they gained a firm stranglehold on proceedings, the points flowed freely.

And by half-time, five of Cork’s six starting forwards were on target from play, with Cronin the exception, and midfielder Daniel Kearney had also helped himself to a point after Gleeson’s ambitious crossfield ball in the 33rd minute was intercepted.

Pauric Mahony’s 21st-minute free was Waterford’s first score for eight minutes of play but Cork hit back with three more without reply to move 0-11 to 0-4 in front.

Mahony responded again for the struggling Déise with their final score of the opening half but Cork were in dominant form and sensed that a goal would kill the tie.

That chance presented itself after points from Cadogan and Kearney but O’Keeffe was out in a flash to meet Nash at the point of contact, similar to Clare goalkeeper Patrick Kelly’s tactic in last year’s All-Ireland final.

Jimmy Barry-Murphy held his players on the pitch before the Leesiders made their way to the tunnel at half-time, in an attempt to avoid further conflict with their opponents.

Meanwhile, Nash was clearly making his point to referee Johnny Ryan, presumably arguing that O’Keeffe had ventured too far from goal when the penalty was being taken.