Cork and Clare to replay after heart-stopping finish 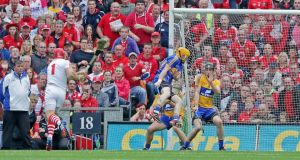 Clare 0-25 Cork 3-16: A draw for the ages. Thirty seconds over the allotted two minutes of injury time, with Cork manager Jimmy Barry Murphy screaming for the whistle, Clare’s Patrick Kelly was allowed puck the ball out.

Patrick Horgan had just given Cork the lead for the first time in the entire match. The sliotar bounced around the middle third of the field like a pinball before, somehow, landing in the lap of Clare corner back Domhnall O’Donovan. A defender masquerading as a wing forward. Not that positions mattered anymore in this helter skelter warzone. O’Donovan hit it from a distant memory, from a lifetime of hurling and the county Clare willed it to carry over Anthony Nash’s crossbar.

Somehow it made it, and come Saturday, September 28th, the sporting world will be gifted a second instalment of this magical All-Ireland final.

Whatever you are doing that day, postpone it and tune in.

Into the eye of the hurricane we go (Don’t expect to get your bearings until the interval gifted the 81,651 collective an opportunity to catch their breath).

All around us the hurling was viciously tempestuous and accurate. Twelve minutes of tetchy hurling had passed when Patrick Horgan rifled over two quick frees after Clare’s muscular defenders David McInerney and Patrick O’Connor battered over nippier Cork forwards.

Unfortunately we had to focus on Brian Gavin’s style of refereeing in those opening 35 minutes. The hurricane picked up pace. As Brendan Bugler landed this gripping encounter’s first wide, Gavin was forced to pause and consult his umpires.

Cork’s Shane O’Neill had smacked Clare’s Darach Honan across the head with his hurley. Gavin listened to his consigliere before dishing out two yellow cards. O’Neill was fortunate not to be dismissed.

In an instant the sliotar was in Daniel Kearney’s paw as the Cork midfielder thundered towards goal. Patrick Kelly made a marvellous reaction save, before scrambling for the rebound and then fouling the ball. Cork free. Up came Anthony Nash.

Gavin, again refusing to be a stickler to the rules, allowed Kelly sprint off his goal-line to block Nash’s shot with his backside.

Cork players protested as Clare shipped possession 80 metres down field. What could’ve been a Cork goal to put them two clear ended up with Podge Collins easing Clare into a 0-6 to 0-4 lead. The Banner men took over. Nash denied Honan’s scuffed shot soon after but Colin Ryan frees had them in a 0-9 to 0-5 lead.

The likes of Conor Ryan and O’Connor were cleaning up the dropping ball. It seemed certain to be Clare’s day. But there was more from Gavin.

When David McInerney mopped up brilliantly he was clearly chopped by a flailing Cork hurl. Gavin deemed otherwise, punishing the Clare fullback for steps. The utterly reliable Horgan reduced arrears and on the match galloped.

Kearney sprayed over a beautiful point but any worry for Clare folk that Brian Murphy would bottle up their beloved man-child Tony Kelly was dismissed as he hit his second score.

In fairness to Murphy he got on the end of typical Cork short offloading to keep it the deficit at three. They finished the half stronger with Horgan adding to his six pointed frees (he finished with 0-10) with a magic score from miles out.

Clare looked the better bet but Cork refused to let them settle; best exemplified by the wide count of Clare’s four to a single miss by Cork.

Kelly and Ryan edged Clare closer to the promised land soon after the break. Cork needed a goal. Conor Lehane, anonymous until this moment, obliged by burning O’Connor before shooting low past Kelly. A point in it now.

The marksmen subplot was dead even: Ryan and Horgan both on seven. Next we got a wonderful score from Podge Collins, striking as he changed direction near the left sideline.

Have no doubt about it; the greatest hurling championship for a generation produced a superbly contested All-Ireland final. But mistakes inevitably crept into the event.

Ryan was wide with two but Conor McGrath and Conlon kept Clare three points ahead with 20 minutes to play. Just as Ryan recovered his mojo to make it a four-point contest, Horgan landed only Cork’s second wide of the afternoon.

It seemed to matter. Especially when Ryan stretched the lead to five just seconds later.

Cork needed another goal. In the final that kept on giving, step forward Anthony Nash who powered a 21-metre free through a crowd of yellow jerseys. Two-point game.

The crowd’s nervous tension had given way to naked aggression. Harnedy was the next rebel to take centre stage, going to ground when surrounded by three defenders. Gavin immediately signalled a penalty. Up came Nash but Conor Ryan got his hurl to goal-ward shot and it stayed out via the crossbar.

The Banner boys seemed to sense their time was now. Ryan struck over a free before the equally influential Ryan plucked a ball from the sky and pointed. But Cork refused to die, Pa Cronin forcing himself into space to grab their third goal.

Horgan then seemed to win it for them, but O’Donovan’s miracle score ensured they’ll do it all again.

1 Serpentine stays on from the front to steal Epsom Derby for Aidan O’Brien
2 Monica Seles: The warrior queen who could have been the best ever
3 Love tears them apart in stunning Epsom Oaks romp
4 Eamon O’Shea: We spent quite a bit of time talking about older people rather than to them
5 Matt Williams: Six Nations must recognise the desire for revolution outside Europe
Real news has value SUBSCRIBE

Chelsea make light work of Watford to move back up to fourth 22:18
Arsenal check Wolves to relight their European fire 19:41
Leeds move four clear as Brentford add to Wigan woes 18:07
Jamie Vardy reaches his century to get Leicester back on track 17:38
Glorious Greenwood as Man United thrash Bournemouth 17:28
Crossword Get access to over 6,000 interactive crosswords