Clare to make it fast and furious against Cork 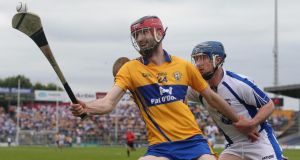 Clare will benefit from the likes of Darach Honan getting some match practice against Waterford. Photograph: Lorraine O’Sullivan/Inpho

If this were the other way around and Cork had beaten Clare three times already this year, there wouldn’t be much discussion about what was going to happen in the Gaelic Grounds tomorrow. The historic relationship between the counties however creates an inclination in Clare to start worrying about the law of averages.

Yet no matter how you spin a pre-season and regulation league defeat, the fact remains that when there was something big on the table in the relegation play-off, Clare still swept the pot. Furthermore in the meantime, Cork have lost key personnel to injury with Lorcán McLoughlin, Pa Cronin and Paudie O’Sullivan all ruled out although Cronin is expected to feature for some of the match.

The pivotal question is not so much how Cork have been weakened but the extent to which Clare have improved as a result of their long awaited championship win earlier this month. If the rate of progress between the first and second half of the Waterford match is maintained, Clare should have little difficulty but if they surrender the initiative for as long as they did in Thurles, Cork won’t labour over putting them away.

Cronin’s absence removes a ball winner from the zone where Clare will aim for optimum impact, the half backs whose fortunes in the last match ran parallel to the team’s, whose responsibility is to stop the undoubted quality of Cork’s half forwards from becoming a bridgehead as well as getting quick ball into their own attack.

Clare are likely to show improvement in attack if even because Waterford will have benefited the match practice requirements of players coming back, like Darach Honan and Conor McGrath, who will surely see more time on the inside line where his threat is optimised and whose form has improved since Thurles.

There will be concerns about Clare’s defence because of the errors made against Waterford and the propensity of the possession game to blow up in a team’s face so it won’t be a surprise to see Clare hitting a bit longer and earlier from the back.

Will Cork be able to stay with Clare’s high-energy movement? The runs by Tony Kelly and John Conlon eventually wore out Waterford and even if Cork play a more instinctive game and let the ball do more of the work, can it be sustained?

The comparison between what the counties have achieved in recent years at underage supports the view that Clare have greater resources, which underpins their favouritism. But whereas no-one doubts their potential, the test for Davy Fitzgerald’s players is how they react to adversity.

Against Waterford they eventually came good but Cork are capable of exerting greater pressure than that. Can they make the favourites crack? In a tight match it can go either way but Clare look ready for this.