Clare set to be without Colm Galvin this summer

Two of the panel dropped after involvement in disciplinary breach 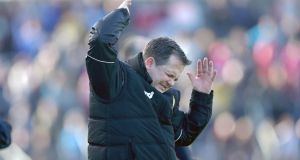 Clare manager Davy Fitzgerald has had to take disciplinary action against two of his squad, as he fights to keep Colm Galvin committed for the year ahead. Photograph: Donall Farmer/Inpho

Davy Fitzgerald has a battle on his hands going into this weekend’s must-win Allianz Hurling League encounter against Dublin.

And he faces another battle to keep classy midfielder Colm Galvin on this side of the Atlantic for the remainder of the season.

Clare have lost all three of their league games to date and entertain Dublin this weekend in desperate need of a first win to help maintain their Division 1A status.

Looking ahead to the summer’s championship though, Fitzgerald’s attentions now centre upon persuading midfielder Galvin not to travel on a J1 visa to the US.

It’s believed Galvin, 22, is intent on travelling for the upcoming summer months having been busy for the past number of years with the county’s U- 21 team.

Since joining the senior panel in 2012 the Clonara club man has won two All-Ireland Under-21 titles and he has often been resigned to 12-month-long seasons due to club and university commitments.

The 2013 All Star has started in all three of Clare’s league games this campaign, scoring four points from play.

Meanwhile Clare’s preparations for Dublin’s visit to Ennis tomorrow have been interrupted by a disciplinary issue within their camp that has led to two members of the panel making way.

It’s believed a handful of the current squad were involved in a disciplinary breach, with Nicky O’Connell and Davy O’Halloran being the two to subsequently depart the panel.

Clonara club man O’Connell has been in the senior panel since making his debut in 2010, winning an All-Ireland two years ago and scoring two points in last year’s Munster championship against Cork.

O’Halloran scored 1-4 in the U- 21 All-Ireland final two years ago and had started in both of Clare’s pre-season Waterford Crystal Cup games this year, yet hadn’t featured whatsoever in the league.

Furthermore Peter Duggan may miss the remainder of the league campaign as he continues his recovery from a hip operation. He has yet to feature this year for the Banner County.