Two second-half goals not enough for Tribesmen in Thurles 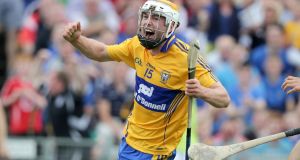 Clare 1-23 Galway 2-14: Given the hurling championship it’s been so far it somehow made sense that the beaten All-Ireland finalists Galway have made their exit in the immediate aftermath of champions Kilkenny.

They were however ultimately out-played by Davy Fitzgerald’s typically enthusiastic Clare team, who will now play Munster champions Limerick in the All-Ireland hurling semi-final next month as Cork were automatically drawn against Dublin, given they lost the Munster final to Limerick.

Galway did start well, moving a couple of points clear thanks to Damien Hayes and Joe Canning, and they looked physically up to the task as well, dominating possession around the middle of the field.

The game lacked the intensity and imperious roars of the Cork-Kilkenny game, but the Clare supporters were soon shouting when McGrath’s searing run – fairly smoking Kevin Hynes in the process – was finished off with a thundering low shot into the net: with that Clare were 1-8 to 0-6 in front and seemingly in control already, Pádraic Collins also chipping in with three excellent first- half points.

A huge point from Darach Honan and another sweet point from McGrath ensured Clare looked more than comfortable at the break, 1-12 to 0-8

Canning missed two frees early in the second half, but Galway got themselves back in it when Jonathan Glynn’s close-range shot at goal somehow rebounded into the net and that brought it back to four, 1-19 to 1-13.

That injected further urgency into the play of both teams, and resulted in some big scores at both ends as Brendan Bugler was on target from long-range for Clare to restore a five-point breathing space, on 53 minutes.

But the contest was far from over yet. Galway substitute Niall Healy was only the field a minute when he latched onto a Canning pass after Clare lost possession, and he blasted into the net.

Points were exchanged between Joseph Cooney and Collins so it remained a three-point advantage to Clare going into the final five minutes. But cool, calm points from Fergal Lynch and Nicky O’Connell made plenty safe for Clare in the end.