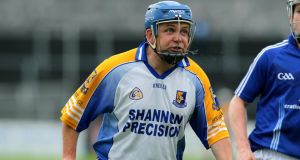 Clare manager and former goalkeeper Davy Fitzgerald. Was one of the Sixmilebridge men on the great Banner team of the 1990s that claimed three Munster and two All-Ireland titles in four years. Photo: Lorraine O’Sullivan/Inpho

When St Joseph’s Doora-Barefield tripped the light fantastic on St Patrick’s Day 1999 to blow Rathnure away in the final of the All Ireland Club Championship, they automatically became made men. Best club side in Ireland, says so right there on the Tommy Moore Cup.

It counted for nothing the following winter though.

“The joke around here,” said then manager Louis Mulqueen as they headed for a second Clare county title on the spin, “is that we only won the All Ireland because we didn’t meet Clarecastle”.

Like all the best jokes, it had plenty of truth in it. Back then, the Clare county championship was the best finishing school in the country. Between 1995 and 2000 the Clare champions each year went on to become the Munster champions.

The Sixmilebridge of Davy Fitz and Mike O’Halloran in 1995, the Shannon Wolfe Tones of the Lohans in ’96, Anthony Daly’s Clarecastle in ’97, followed by back-to-back titles for Jamesie O’Connor and Seánie McMahon et al with Doora-Barefield in ’98 and ’99.

The era was rounded out by Sixmilebridge in 2000, Davy Fitzgerald still a whirlwind in goal and Niall Gilligan driving the scoreboard up front.

There were the big beasts and then there was everybody else. Two-thirds of the All-Ireland-winning teams of the 1990s came from just those four clubs. The rest were satellites spinning around them.

Run your finger down the pen pics of the team for tomorrow though and the shift in power is bracing. Not one of those four clubs is represented in the starting 15. Of the bench, only Seadna Morey of Sixmilebridge and Jonathan Clancy of Clarecastle fly the flag.

Clonlara and Cratloe provide almost half the team now between them, with the rest made up of single representatives from eight other clubs.

County final
That two such tiny clubs can be so heavily represented would be impressive even if they both had a long history of success.

But before 2008, they had been in precisely one Clare county final between them – which Clonlara won all the way back in 1919.

Well, life happened for one thing. Clonlara and Cratloe found their population swelling over the course of a couple of decades. In the 1991 census, Clonlara was home to 399 people; by 2011, that number had risen to 627. The equivalent numbers in Cratloe were 510 in 1991 and 674 in 2011. More people, more kids, more seeds for watering.

“A lot of it is down to the primary schools in both villages,” says Peter Casey, a Clare Games Development Officer.

“The principals of both schools who have now retired – PJ Fitzpatrick in Clonlara and Jodie O’Connor in Cratloe – they would have spent an awful lot of time coaching very young children. They both got in there early and their local clubs got built up on the back of that work.

“A lot of people moved into those areas from outside the locality. There would have been big population growth in both villages and both primary schools have got bigger as a result.

“Life tends to be fair. If you put in the work with young kids, you will see the results 10, 15 years later. Unfortunately, some clubs who find it difficult at minor and under-21 level can nearly always trace it back to a lack of work that was done 10 years previously.”

To rise
Of course, for teams to rise, others must fall. Some of it can be ascribed to the natural cycles of success, dependent as always on the talent available.

Jamesie O’Connor points out that a place like Shannon was coming down with male teachers in the 1980s – including one Máistir Loughnane – and when you add that to someone like Gus Lohan (he of 11 county medals) producing a couple of sons, you’ve got circumstances that are difficult to repeat.

But there’s also an undeniable truth in the fact that the bigger clubs got a little fat and a little lazy on the back of their success.

“I remember Paudie Butler saying that sometimes when clubs are thinking they’re doing great coaching, in fact it’s the schools doing it for them,” says O’Connor.

“I think certainly ourselves (Doora-Barefield), Clarecastle, Wolfe Tones and Éire Óg – the big urban centres in Clare – probably took their eye of the ball. And the work maybe wasn’t put in at the formative age groups. That’s a big factor.”

Casey agrees, although he’s keen to point out that clubs have been getting their act together all across the county in recent years. Hence the All-Ireland final appearance, obviously.

Great work
“Sixmilebridge are doing great work now – they won the under-21 ‘A’ championship this year and will have three or four players on the Clare team in the next few years. Clarecastle were in the minor final last year and have a very good minor team this year.

“But there’s no doubt about it – there would have been complacency in some of the successful clubs for a period of five or six years. There definitely would have been an attitude of, ‘We’re always going to keep producing these players by the very fact that we have a tradition.’ That has changed and those clubs are on the way back.”

If they are and if the tide keeps rising, Clare will be around for a while. Regardless of what happens tomorrow.