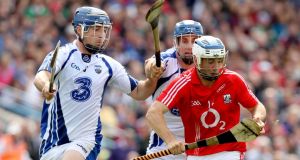 I expected this to be an open Munster championship and it hasn’t disappointed. Even Waterford might have felt they’d a chance had they not lost a number of players. Limerick’s win over Tipperary will have raised the stakes for both Clare and Cork, who will now see a provincial title as more attainable.

There’s been a shift towards Clare since they beat Waterford and Cork have suffered injuries to key players but I’m wary of getting too carried away by this, as I think it’ll still go the distance.

For the younger Cork players, who have the experience of an All-Ireland semi-final last year, winning Munster would be a big achievement for Cork and you can’t entirely discount that, as Clare are a work in progress too.

Their status as favourites is based on the belief that they will kick on from what was their first Munster championship win since 2008. They will need that improvement, as they were very nervous against Waterford. The enormity of the match’s importance seemed to get to them and they made mistakes.

Poor shooting
From what I saw of them during the league they are prone to errors: consistently making mistakes at the back and guilty of poor shooting from midfield up with buckets of wides against Kilkenny in a match they could have won and against Cork in the relegation play-off.

These problems were again in evidence in the Waterford match with poor decision- making in attack before they got going in the second half and early defensive mistakes costing scores.

They also appear to have difficulty transitioning from the short-game tactics that they were in thrall to last year and which I think Davy Fitzgerald, to his credit, is trying to amend.

At times they’re still overdoing the short game at the back and then, in contrast, in attack they shoot – and often miss – from anywhere.

Tony Kelly is going to be a problem for Cork because he’s been getting scores and making a lot of the play. Nominally a centre forward, he gets everywhere and may require a man marker, someone like Brian Murphy, who probably won’t start full back in any case with Stephen McDonnell moving over.

Key matches
Cork were relegated in the league but nearly beat Clare and were close in their key matches but they’ve lost players since then and are missing Lorcán McLaughlin, Pa Cronin and Paudie O’Sullivan. I think O’Sullivan is a huge loss because he’s developed and looked fitter and more dangerous with the experience he’s gained.

They are now relying on the UCC Fitzgibbon team for a number of players. William Egan, Daniel Kearney, Conor Lehane and Séamus Harnedy have great potential but are relatively inexperienced at senior level. From a positive point of view for Cork, UCC have dominated Fitzgibbon for a couple of years and their most important players are playing for Cork tomorrow.

Another, Luke O’Farrell, was also outstanding in the Fitzgibbon, for Mary I.

The danger for Clare is that Cork might get goals – O’Farrell especially is capable of getting them – and because of mistakes in defence.

Overall though and taking into account Cork’s injured list, I think Clare can improve and have the edge as well as a better bench and we saw in the Limerick-Tipp match how important that is.

In Portlaoise it’s very hard to make a case for Dublin but the matches against Wexford will have improved them a bit albeit from a low level. They don’t have a lot to lose against Kilkenny, unlike last year when they were given a big chance and flopped under the pressure.

Their problems in the championship last year when losing to Clare have by and large remained. They have to work too hard for scores and score very few goals. Their touch can be unreliable and they’ve really been struggling since the highs of 2011.

They’ve had very few players coming through, which has been disappointing. The best hurlers have opted to play football and attracting players is proving as difficult as it ever was despite underage successes.

I’m not convinced however that Kilkenny are going as well as people think. They weren’t that impressive in the league apart from the final and were poor against Offaly. I don’t think they’re going to hammer Dublin and this fixture can give us a good read on where Kilkenny really are without Henry Shefflin.

Offaly are in action today and they did well against Kilkenny. Physically strong and able to win ball and use it well, I think they’ll have too much for a Waterford side that’s really feeling the impact of having to replace so many important players.

Wexford will be glad that they’re not going to Belfast, given their league record against Antrim but at home they should win and Westmeath will be too strong for London.