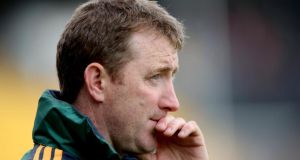 Brian Whelahan: The young Kilkenny players are “relishing the thought of carrying on the tradition that has gone before them.” Photograph: James Crombie/Inpho

Losing four players, 28 All-Ireland medals between them, in the space of a week - you’d imagine Kilkenny will struggle to immediately replace that well of experience and constant striving for success.

Tommy Walsh for one, he mightn’t have featured as often over the last 12 months as in the past but to lose one of the all-time greats and a leader of the dressing room, compounded by the departures of David Herity, Brian Hogan and Aidan Fogarty all veterans, Brian Cody must be somewhat concerned?

“There’s been great talks of how Tommy went down to the dressing room at half-time in the drawn game, and gave a rousing, motivational speech,” explains Offaly manager Brian Whelahan.

“He played a very big part in all of his many years with Kilkenny, on the greatest team that we’ve ever seen and you you can’t speak highly enough of him. They’ve done it all really and their presence and attitude in training and the way they’d have been striving to keep pressure on the lads in first fifteen all would have been a factor in Kilkenny’s success up to last year.”

“Obviously then Brian Hogan too has played a very big part, and it was a big call this year from Brian Cody between the drawn game and the replay to make the decisions he did .”

Dropped for the final

Having started against Tipperary in this year’s drawn All-Ireland final, Cody replaced Brian Hogan with Kieran Joyce for the replay, the latter being named as man of the match.

“I suppose they came to the stage in their career where things start to be more time consuming, but Brian has played such a central part, he’s been an ever-present there for the last ten years.

“He had a huge presence alongside Walsh and for a long time JJ Delaney in the half-back line and they are no longer going to be togging out together in the black and amber jersey and it is something that you might not see the likes of again.

”But Kilkenny have a policy in place now that every kid wants to hurl with Kilkenny in Kilkenny and they have succeeded in making that the number one goal for every person who picks up a hurl in the county, and you just have to admire it.”

Last year none of the four recent retirees started the replayed All-Ireland final, as Kilkenny introduced youngsters such as Padraig Walsh and Cillian Buckley into a team who won a first Leinster title since 2011, and an All-Ireland title which seemed unlikely 12 months earlier.

“For the young players coming through though, you have Padraig Walsh who looks ready to take over from his older brother in that position and you have Cillian Buckley and Kieran Joyce and Joey Holden all coming through, and these guys are relishing the thought of carrying on the tradition that has gone on before them.

“That’s the motivational factor in itself that these lads are going to be judged against what’s gone before them and they know that, and that will be got across to them, that the jersey is yours while you stay performing and that’s what keeps Kilkenny at the very top.

“That inner-motivating factor that I suppose a lot of teams lose after reaching the ultimate success, and finding it very hard to come back the following year and do it again. That’s how every other county looks in and envies and admires what’s been built there.”

Pep in their step

The man widely regarded as one of the greatest hurlers in the history of the game, a four-time All Star winner, the first ever Hurler of the Year and left wing-back on the Hurling Team of the Millennium, Whelan is full of admiration for what Kilkenny have achieved in his own province and beyond.

“At the end of the day every player who goes out in every county, there should be nothing more motivating than going out on a Sunday and playing against the best hurlers in the country, that’s what you train for.

“I don’t think there’ll be any extra pep in anyone’s step though from a point of view that it will now be easier to win an All-Ireland next year with these boys gone.

“Definitely not, because Kilkenny will be as hard to beat next year as they ever have been, due to that structure they have put in place over the last ten years that to get the Kilkenny jersey is the ultimate and to hold on to it is a very precious statement in itself.

“So Kilkenny’s standard will not drop next year, Brian Cody is staying on and he’ll know that there’s great talent there. He wouldn’t have stayed on if he thought this wasn’t going to continue and I suppose he’s going to ensure that.”

Offaly club champions Kilcormac-Killoughey face Kilkenny’s Ballyhale Shamrocks on Sunday December 7th in their provincial showdown.Two years ago they reached the All-Ireland club decider, although they are unlikely to have ever faced a stiffer challenge than that which Balllyhale will present.

The five-times All-Ireland champions are in ruthless pursuit of breaking Whelahan’s own club Birr’s record of seven Leinster titles.

“For me Kilcormac-Killoughey have a huge job ahead of them and it’s a challenge which I think they will be relishing really because there’s no greater motivation than hurling a Kilkenny team in a Leinster final.

“Also Ballyhale are one of the kingpins of club hurling in the country and Kilcormac-Killoughey will be going in as strong underdogs but will be looking forward to the whole challenge that comes with that.

“We just have to go back to the All-Ireland semi-final a number of years ago against Thurles Sarsfields when they upset the apple cart and were very convincing winners that day in Portlaoise.

“ I can see no reason why they can’t cause an upset again and if they can get up to the level of performance they reached that year then we are going to have a very close game. Belief goes a long way to actually making it happen.”