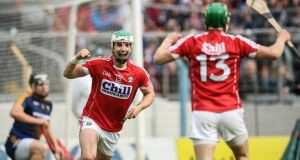 Kieran Kingston’s side came to Semple Stadium with the highest hopes of their supporters pitched somewhere around just getting a performance and hoping for the best. Instead, they got a display of wonder and skill and pure distilled Corkness to send Tipp packing.

After a game of incredible drama and switchback twists and turns, it was substitute Michael Cahalane who had the killshot, his 69th-minute goal off the bench sending the town end of Semple into orbit and knocking Tipp’s Munster crown into last week.

It was sort of game that makes you wonder why we ever wonder. Why we ever spend even a moment cribbing about the state of things. Cork did what they said they were going to do - come and play, give youth and speed and skill its say and take their chances with whatever came out of its mouth. The result was a game where they had already outstripped last year’s points total by half-time.

They gave Tipp buckets of trouble all over the pitch. All six Cork forwards had scored from play by the 24th minute. John O’Keeffe had to be switched off Alan Cadogan as early as the 14th minute and was rewarded by Patrick Horgan planting a point off him almost immediately. Luke Meade roved around the Cork attack swishing points at will from both flanks.

So many of the Tipp defenders, the rock on which their All-Ireland was built, were in trouble. James Barry had a yellow card to his name after a minute; Ronan Maher was getting a run-around anytime Cork went down the middle, which was often. Darragh Fitzgibbon ghosted past him on a couple of occasions, just by dint of having too many wheels for the Tipp centre-back.

And still, Mick Ryan’s side aren’t champions by accident. At the other end, they were doing enough to stay in the game, which is often all they need. Bubbles O’Dwyer was in bewitching form, shucking and jiving in possession to set up the players around him for scores and slicing over a sideline cut of his own. Noel McGrath and Michael Breen stitched opportunist points to keep the thing rolling, Seamie Callanan did his bit too.

It all added up to a half-time score of 0-15 to 0-15. On top of the 30 scores, both sides would have gone in feeling they’d left a goal behind them. Noel McGrath and Brendan Maher both saw the whites of Anthony Nash’s eyes early on but McGrath kicked over the bar and Maher’s shot was saved. Nash made a late save from Callanan as well, to start a move that ended with Seamus Harnedy clanking a shot off the upright at the other end.

It was breathless stuff. Life happening everywhere you looked.

All it needed was a goal. Well, it didn’t need a goal, exactly. And maybe it was the height of cheek to ask for one. But it came - and it came for Cork, which added even further layer of intrigue.

Seamus Harnedy skinned James Barry on the outside and bore down on goal, flicking a pass to Shane Kingston in the middle. It took Kingston two swipes to get any purchase and even then, the second one was a bobbled effort but it was enough to scuttle pass Darren Gleeson to put Cork 1-17 to 0-16 ahead.

Tipp came again. Noel McGrath landed a monster from 80 metres, Michael Breen stitched two of his own. Cork replied with points from the outstanding Conor Lehane and a revitalised Horgan. Though Cork’s young players had given them impetus, their elder statesmen did their bit and more.

They had to. It was always unlikely Tipp would leave without a goal of their own and it duly came on 56 minutes. Callanan was the focal point of every Tipp attack by this stage, a damning indictment in itself. At the same time, it was no surprise given that he was able to conjure a pass like the one he sent into John McGrath for the younger McGrath to nail a brilliant goal. It pushed Tipp 1-22 to 1-21 ahead.

To and fro, back and forth. Cork saw Tipp’s bet and raised it, Lehane and Kingston splitting the posts within a minute of McGrath’s goal to push them back ahead. Niall O’Meara came off the bench to land an equaliser from midfield, Brendan Maher made hay from Callanan sucking half the Cork defence to him to edge the champions ahead again on 65 minutes.

This was it for Cork. What was it to be? Garlands or sympathetic pats on the back for a fight well fought? Lehane wouldn’t be denied. He dropped another incredible effort over the bar from out on the right-hand sideline and then potted a 65 to make it 1-25 to 1-24 with two minutes to go.

Enter Cahalane. A high ball caused confusion in the Tipp defence, with James Barry and substitute Alan Flynn both going for it and neither getting it. Cahalane nipped in and banged the full-stop score past Gleeson.

Hurling, huh? Sure where would we be without it?