Kilkenny-Tipperary duopoly can be broken this year 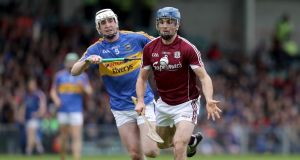 In recent years, before a ball is thrown in, I’ve been anticipating an open hurling championship, only to look back with hindsight when it’s all over and done with to realise the duopoly of Kilkenny and Tipperary has usually prevailed: mainly Kilkenny, occasionally Tipperary . . . . and with only Clare (in 2013) managing to break that axis of power inside the last 10 years.

So, why should it seem that this championship will be any different? Well, it is for a number of reasons, and not just because of Galway’s league final win over Tipperary.

Up to that league final, there was a perception out there that Tipperary had opened a gap on everyone else. It was a theory I didn’t subscribe to, to be honest. You only had to look at the form from last year’s All-Ireland semi-final to say Tipperary weren’t a huge amount ahead. Then the league final blew that perception out of the water. It brought a short, sharp dose of reality to Tipperary.

The last two All-Irelands have given us the same four teams at the semi-final stage. Again, I do think that group of four – Tipperary, Galway, Waterford and Kilkenny – are the top teams. But there is a group of four, five if you include Dublin, who are second seeds in my view and trying to make the leap to an All-Ireland semi-final. Clare (who are biting at the bit to break into the top four), Limerick, Cork and Wexford are waiting in line, in that order, with Dublin – a team in transition – as the fifth.

All of which means we’re looking at a championship with more teams capable of competing than has been the case for the last number of years.

Tipperary are the defending champions but the task of winning back-to-back All-Irelands is one that the county has found to be a hard ask. We’ve to go back to 1965 since Tipperary last managed to do it and I’ve been involved three times – twice as a player and once as a manager – in unsuccessfully attempting to retain the Liam MacCarthy Cup.

What happened in the league final was interesting. Tipperary had eased through the league campaign (which led to that mistaken belief that a gap had formed between them and everyone else) but came very much unstuck in the final when they were without Seámus Callanan. There’s two excuses for what happened, one being that Division 1B teams (Galway in this case) might be fresher, which is plausible and possible. But perhaps it was a case of providing early evidence of the weight of expectation of Tipperary Inc – a body that includes everyone from team players and management to supporters – which tends to get ahead of itself in a year when attempting to claim back-to-back All-Ireland titles.

Is it better to discover this in the league final and get beaten then? Of course it is, especially if you can quench that little bit of expectancy for the championship.

Tipperary face the same difficult pathway of three matches in Munster if they are to achieve a repeat win in the All-Ireland. I would have thought last year was a potentially hard road for Tipperary, especially given that no one since Cork in 1966 had emerged through the province in that manner. However, Cork played with a sweeper, a system that didn’t work; Limerick were effectively non-contenders; and Waterford didn’t turn up in the Munster final. That three-game journey wasn’t in hindsight as tough as it had seemed.

But this year’s route looks a tougher one because Cork have improved, Waterford are serious contenders and then either Clare or Limerick in a final will bring teams much different to last year.

Yes, Tipperary are favourites and have a huge amount of good players, but it is not a straightforward route, even with Callanan likely to be back.

The Munster championship should be a compelling one. Clare are reputedly going well. Limerick are definitely not to be underestimated with an awful lot of good young players, and they were very disappointed with the league semi-final display against Galway. But then Galway did the same and worse against Tipperary, so maybe Limerick can take some heart. Their semi-final with Clare is a derby and a 50:50 call.

I expect Cork to improve this year. Kieran Kingston has put his faith in young players and has had longer to work with the team. In Luke Meade and Mark Coleman, they’ve young players to watch out for. I don’t think we’ll see Cork utilising a sweeper this time.

Waterford won the All-Ireland under-21 title in such style last year but it was hard to make out what they were at in the league, beating Kilkenny in Nowlan Park and then taking their foot off the gas and exiting with a second team against Galway. This is an important year for them, to build on the under-21 success, again reach a Munster final, and this time win it.

The big question hangs over Galway. Their inconsistency has proven heartbreaking for their supporters over the last number of years. But, based on what I saw in the league final, and allowing for the fact Tipperary were very poor that day, Galway have improved from last year. I’ve a lot of respect for their manager, Micheál Donoghue, as a tactician and they’re a lot more cohesive as a defensive unit and they’ll be hard to beat in Leinster and beyond.

I believe the Kilkenny-Wexford match will be huge, but Kilkenny have been forewarned after their defeat in the league where Wexford effectively bullied them out of it. It’ll be a match to savour. Kilkenny are not the force of old but they’ve got TJ Reid and Richie Hogan and they’re not to be dismissed. If it is to be a Galway-Kilkenny Leinster final, then I think Galway need to win that if they’re to win the All-Ireland.

The way the championship works out, though, it is all about getting through to the last six. It might ultimately come down to how the balls comes out of the hat in terms of who plays who in the quarter-finals or semi-finals. That may be a determining factor in who will go on to win out. For example, Waterford seem to be able to beat Galway; Galway seem able over the last number of years to put it up to Tipperary, whereas Tipperary are able to beat Waterford, and up to recently Kilkenny were able to beat them all.

Ultimately, though, I do think it will be Galway’s year.