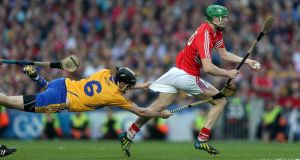 In hurling mythology there is a story that when spirits wished to organise matches in the other world, they would whisk away gifted mortals – the legend usually refers to Kilkenny’s Lory Meagher – as they slept to play in these preternatural contests before returning them safely, leaving the with only dreams of their twilight exploits.

On Saturday evening in Croke Park, as the floodlights illuminated this year’s GAA All-Ireland hurling final replay within the ambient autumnal glow you could actually imagine that you were watching something from a dream world.

The skills, the speed of their execution, the drama of the biggest All-Ireland goal haul in over 40 years (and even that was an 80-minute final) and the courage of Cork’s unflagging resistance in the face of the winners’ at times sublime touch and striking shimmered in front of the biggest attendance of the year (82,276 – two more than the football final!) to provide a fitting conclusion to this most memorable of hurling championships.

The titanic contest for this year’s Liam MacCarthy Cup finally resolved itself in Clare’s favour. David Fitzgerald’s young team played with the pace and fluency that has developed at a frightening rate this year to make a mockery of their starting odds of 22 to 1.

There are few guarantees with All-Ireland finals let alone replays but in the end the evident superiority established by Clare in the drawn match ultimately proved a more reliable guide to the outcome than Cork’s room for improvement.

Yet Cork were co-producers of the riveting spectacle. Apparently swept away in the early stages during which Clare’s late selection, the 19-year old Shane O’Donnell helped himself to surely the fastest hat-trick in All-Ireland history, they somehow responded. By the 19th minute O’Donnell had registered 10 points (3-1) on one of the best defenders of the championship, Shane O’Neill while Colin Ryan’s free-taking was lethal and composed.

The ship
But having steadied the ship against the early relentless waves of Clare’s attacks, flowing from a dominant defence and exceptional ball delivered into the attack, Cork wrested back the initiative. For nearly half an hour either side of half-time they outscored their opponents 0-9 to 0-1 and by the beginning of the final quarter they were – incredibly – level.

Then in the final minutes just as Clare took scores that persuaded everyone watching to deem them game-breakers, Cork came back. Jimmy Barry-Murphy’s team scored goals in the 60th and 70th minutes to first equalise and then pull back to within three points their rampant opponents.

Saturday differed from the drawn final in that Cork’s challenge was more sustained, especially in the third quarter when they recovered to wipe out the big deficit – at its most daunting, eight points by the 26th minute – and although they were hanging on bravely by the end there was no doubt they had both pushed Clare harder and forced an even greater performance from their opponents than three weeks previously.

The nature of that challenge confers on Clare the ultimate distinction; Cork threw everything they had at them but couldn’t deny the force of the performance.

If O’Donnell was the weapon of choice, especially in the first half, there were other exceptional contributions to the victory. Conor McGrath would have been a consensus Man of the Match but for his youthful team-mate’s exceptional productivity. He played deep and once he got a wide in the opening seconds out of his system, he was the heartbeat of the team.

He answered the equalising goal of the admirably effective Séamus Harnedy, which severely tested a team who would have thought it had made the decisive break on the scoreboard, with one of his own. Emerging from a centrefield thicket to race in on goal and decline either a handy point or a quick pass to the unmarked O’Donnell, instead he hammered it into the top of the net.

His match total of 1-1, a substantial assist for O’Donnell’s second goal, and being fouled for a pointed free, hints at what was a major contribution.

Eight points
Cork greatly improved their match-ups. Being unable to clone Brian Murphy, they switched his attention from Tony Kelly to Pádraic Collins, who had managed eight points from play in two championship meetings with Cork. He managed none this time.

Kelly however was gamely marked by Stephen McDonnell, who was to the forefront of Cork’s ascendancy in the middle third of the match even if Kelly’s impact was still significant, his three points being supplemented by good work in dragging away from the middle to allow a runway for a couple of his team-mates.

He was integrally involved in all three goals – being fouled for Nash’s free, breaking the ball that led to Harnedy’s goal and providing the scoring pass for Moylan – and drawing three converted frees to go with own point, which was rescued from the wides’ column by the intervention of Hawk-Eye.

The damage
Clare obviously had their outstanding contributions and when the forwards were under the hammer during their unproductive period, it was the defence that had to limit the damage of a one-way flow of ball into the Cork attack. That they held out sufficiently was a tribute to a tremendous collective spirit but especially to the unflinching work and drive of corner back David McInerney and wing back Brendan Bugler.

Cork’s point-scoring was done by the end of the third quarter but even as Clare threatened to pull away, the goals got in the way. The very end came when replacement Séadna Morey streaked away down the left wing that had been the source of Clare’s deliverance in the dying seconds of the drawn match and set up Darach Honan’s goal.

The stadium heaved the final gasp of a remarkable evening, leaving all present wondering had they dreamed it all. Except no-one’s imagination is that good.