Antrim must plan without Liam Watson for Christy Ring campaign 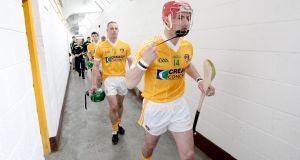 Liam Watson had not played for Antrim since 2012 but last week opted out of the squad for the 2016 season. Photograph: Inpho.

Antrim will again be without the services of talented marksman Liam Watson for the remainder of the 2016 season after he opted out of their senior squad last week.

The Loughgiel Shamrocks club man, an integral part of their All-Ireland club winning team in 2012, had returned to the fold this year after an extended exile under the tenure of Kevin Ryan.

Yet the 33-year-old returned at the start of this year’s campaign to play under the manager who led Loughgiel to that St Patrick’s day triumph, his club mate PJ O’Mullan. Under his guidance that year Watson managed 0-16 in the semi-final win over Na Piarsaigh and a further three goals in the final against Coolderry.

Having lined out at wing forward in the opening Division 2A league game against Derry in mid-February, Watson featured between the half forward line and at centre half back as his county followed up initial wins over the Oak county and Kildare, with disappointing losses to Westmeath, Carlow and finally London.

He told reporters earlier in the year of his desire to return and “put 100 per cent into it” for the Saffrons having previosuly turned down advances from the Dublin set-up, but his manager told The Irish Times this week that he’s now found himself unable to maintain that level of commitment and has hence opted out of the fold.

Watson informed the management of his decision prior to last Sunday’s defeat to London - one which the county board say has triggered a review of the league campaign to be held late next week. Officials will meet with management to essentially discuss what went wrong in the county’s failed bid to return straight back to Division 1B.

Watson aside, a player turnover involving a number of the current squad is imminent ahead of the Christy Ring Cup - with at least five players being let go and the same number coming in. Included in that will be members of the Cushendall contingent who were beaten in last week’s senior All-Ireland club final. Although their talisman Neil McManus has already made himself unavailable as he plans to travel abroad in the coming months.