After close opening, Donegal’s Frank McGlynn says ‘scoreboard flattered us at the end’ 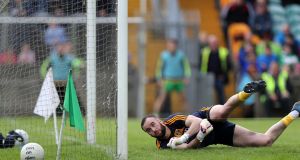 The biggest cheer in MacCumhaill Park came midway through the second half when Michael Murphy hoisted a Donegal point from play.

There was little to cheer in this game until a big turning point before the break. Matthew Fitzpatrick, the Antrim player who got a ban quashed to play, had a great goal chance but pulled his effort across the Donegal goal and wide.

From the kick-out, Donegal went upfield and Michael Murphy and Michael Carroll combined to set Jamie Brennan through for the first goal of the game.

Brennan would add a point immediately as Fitzpatrick was stretchered from the ground after picking up a serious ankle injury.

From being a close game, Donegal were 1-8 to 0-6 ahead going into the dressing room and in reality there was no way back for Antrim.

The second half proved to be a walk in the park for Donegal with Michael Murphy controlling affairs around midfield, tacking on four points.

Paddy McGrath came forward from corner-back to walk the ball into the net for his first championship goal. Indeed, McGrath had only ever scored two points in a county jersey before.

Patrick McBrearty, who was omitted from the starting 15, came on and hit 1-2, the goal a very well finished effort, while 19-year-old Michael Langan also came in to hit 0-2.

In all there were three 19-year-olds – Langan, Michael Carroll and Jason McGee – making their debut for Donegal, while seven of the players used were making their first championship start.

Antrim hit a goal with the last kick of the game from Conor Small to put a better look on the scoreboard.

“Antrim missed a lot of chances in the first half and those chances were taken it could have been a different game,” said McGlynn.

“Overall we’re happy with result. You’re always happy with a with a win in the Ulster Championship and we still have plenty of things to work on for the next day,” he said.