Wicklow put league form behind them to beat Longford 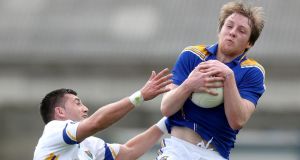 Wicklow 1-15 Longford 0-16: Wicklow’s footballers got away to a flying start to the Leinster championship today beating Longford by a narrow two-point margin in their opening match at Aughrim.

Both teams were coming off a bad runs in the league, relegated in their respective divisions, and in the case of Wicklow, in particular, the performance was a big improvement.

Despite playing against a crossfield breeze in the opening half, Wicklow had a whirlwind opening, dominating much of the opening period as they raced into a 0-9 to 0-5 lead at the break, their performance anchored on a strong half back line of Dean Healy, Patrick McWalter -both of whom got on the scoresheet - and Darren Hayden.

James Stafford was given the number 11 shirt but swapped with Rory Finn to partner Anthony McLoughlin at midfield, while Seanie Furlong was the main target man up front.

Substitute Donal McElligott cut the deficit to three points immediately after the restart, but Wicklow swept downfield straight away and Furlong blasted to the net from close range after taking the final pass from Darragh O’Sullivan.

Wicklow now led by double scores 1-9 to 0-6 and it appeared that the goal had virtually gift wrapped victory for the home county.

Pep talk
But Longford were a very different side in the second half and mounted a serious challenge to Wicklow’s earlier supremacy.

Corner-forward Seán McCormack was their chief marksman, while Paul Barden, midfielder John Keegan and McElligott again chipped in with points as the midlanders cut the margin to two points on a number of occasions.

However, Wicklow had just enough fuel in the tank to respond each time, with Dean Healy, Furlong and Stafford meeting the challenge with scoring replies.

Stafford had a good chance to add a goal to his tally but Longford keeper Damien Sheridan got down well to smother the shot.