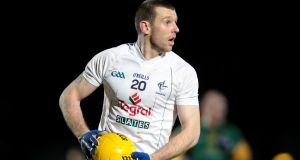 Ronan Sweeney: the 36-year-old is one of Moorefield’s star players. Photograph: James Crombie/Inpho

TG4’s Underdogs series follows the journey of some of the best club players from around the country as they prepare to take on a county team. To be eligible players (over 18) must have never previously played intercounty senior championship football. Episode four is at 9.30pm on Thursday.

After losing by a point in our first two matches as Underdogs, the third camp was all about going after a first win as a team.

Up to this point we hadn’t necessarily been prioritising results, we had used 17 substitutions in the first match and 15 in the next. One followed a maximum endurance test and the other a three-day Army camp. We’d also been starting the three players up for eviction to give them their best chance to fight it out for survival.

Lads still got their opportunity here, and there was experimentation in terms of positioning, but moving into the busiest club period of the year we needed to grasp that winning feeling while still at almost full strength. So against reigning Leinster club champions Moorefield we decided as a team that we were targeting the victory. Well, that was the plan anyway.

A big and well organised opposition, one of Moorefield’s star players is Ronan Sweeney, who is 36. I know some of our elder statesmen took encouragement from the former Kildare attacker’s performance.

We spent the two previous nights in the dorms in Clongowes Wood College in Kildare, and the facilities in the school are incredible. They include a large sports hall and gym, a golf course, tennis courts, rugby pitches (which we converted to GAA pitches), athletics track, an all-weather floodlit pitch, a cross-country running track, and a swimming pool with a separate hydrotherapy pool. The latter was key for recovery.

It’s no wonder they are proving a conveyor belt for Irish international rugby players – every requirement of an aspiring top-level athlete is catered for Monday to Friday.

Each Underdogs camp involves both football training and some activities that help us gel as a team. Or sometimes are just a bit of fun, and an opportunity for the cameras to get some interesting shots of us. Doing something daft, they hope.

We didn’t have far to go for anything in this camp, however. The school even has its own farm, where we were asked to do a bit of work. Even the Dublin lads got their hands dirty here, to the amusement of the rest of us.

The following day the Galway football squad’s stats man came in to speak to us, and he had taken a look at our previous match. As a journalist it was interesting to see the different tools he used in his analysis, and the parts of the game he has obviously been assigned to focus on.

The point that stuck with me was how modern teams, he says, are no longer focusing on recording turnovers. A failed turnover is now too costly, so players are instead noted if they are “breached”. A breach is wherein the defensive line is broken.

So basically in promoting turnovers a player may win possession back on two occasions but in other failed attempts they may have allowed for numerous defensive breaches.

You can see the logic – that modern defending is about the collective unit rather than individual endeavour – but not every manager would agree.

A lot of the squad could recall instances where stats in a dressing-room have felt like, literally, a box-ticking exercise. Or where teams have gone way overboard in focusing on them. To the point where it feels like the stats man is a selector. So it was interesting to gain an insight into how a Division One county outift strike a balance.

You can judge it all for yourself on Thursday night, that’s assuming they show that meeting.

Awaiting each episode we have no idea what part of our camp is going to be focused on. A number of key players have barely even featured in the show so far, but I’d imagine that’s about to change for our centre back Anthony Durney.

In the past two camps he’s faced his employers – the Army – and in this camp he had to lead us out against his own club. On top of that, he left on the day of the match to go to a wedding, he then left that to play, and rushed back to it again following the 60 minutes.

It sums up the commitment lads are showing to take part in this journey, and take advantage of the opportunity it provides.

Fellas have been travelling the length and breadth of the country, not just to be at camps, but to then go back to play and train with their clubs, and then back again to the camp.

It’s madness, really, but a madness which Underdogs needs in abundance.