Tyrone rise to the challenge again to topple Monaghan

This is Tyrone. This is Mickey Harte. There to the end, still forging on long after the rest have run out of excuses. They were the first team to lose an Ulster championship match in 2015, they’re the last Ulster team standing come the business end.

They gave Monaghan a thorough schooling on Saturday evening. The Ulster champions couldn’t match them in any department and went home having yet again flattered to deceive in Croke Park. Outside of Conor McManus, it’s hard to think of a Monaghan player who did himself justice. Tyrone, by contrast, met the occasion en masse and used all their skills and wiles to come through it.

No, it wasn’t pretty. But to those recoiling in horror at the messy ending the question must be asked – exactly what did you think was going to happen? As Basil Fawlty might put it, this is Tyrone v Monaghan, Madam.

Anyone who has watched these teams face off over the past five seasons saw nothing to surprise them on Saturday night, save perhaps the curious flatness of the Monaghan performance. All the rivers of praise that flowed in their direction after the Ulster final have dried up after this. For three years in a row now, they’ve gone out at the quarter-final stage without looking like they belong in it.

They ceded Niall Morgan’s kick-out all evening and allowed Tyrone to build from the back. A few early points from distance aside, they lacked incision and direction. The hard running and precise kick-passing that served them so well in the Ulster final was swallowed by the hangman’s lasso and had the life choked out of it.

Tyrone approached the game with a practised and professional lust for battle. For all the talk of Monaghan’s momentum after a second Ulster title, Harte would have bitten your hand off back in May if you’d offered him an All-Ireland quarter-final against their upstart neighbours to the south. 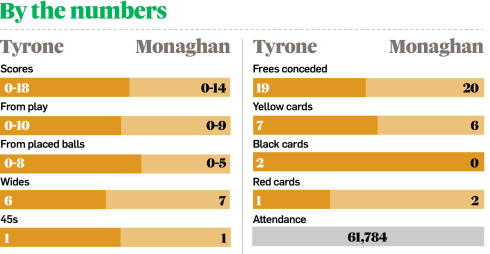 This moves Harte into his sixth All-Ireland semi-final. Only Mick O’Dwyer, Seán Boylan and Billy Morgan have been to more. He’s seen a generation of born leaders move on and has had to fashion made ones out of what remained. Only the McMahon and Cavanagh brothers are still available to him from the panel that played in his fourth All-Ireland semi-final in 2009.

Instead, this is the team of Mattie Donnelly and Peter Harte, both impeccable here. Of Darren McCurry and Connor McAliskey, both given to occasional flightiness but faultless in front of goal on Saturday.

Even their younger players like Mark Bradley and Tiernan McCann led from the front. Even McCann’s chronically embarrassing dive to get Darren Hughes sent off at the end can’t obscure the amount of work he got through beforehand.

Tyrone’s gameplan was devastatingly simple. Built on an expertly-drilled 13-man defence, they drew Monaghan into them, turned them over repeatedly and used the ball better when they got to the other end. Helped by some decidedly soft free-awarding from Marty Duffy, they were more than worth their half-time lead of 0-7 to 0-5.

Joe McMahon and Peter Harte had both thrown into the pot for that total and McCurry had clipped a beauty despite the close attentions of Ryan Wylie. On Monaghan’s side of things, there was little to cheer outside early scores from Dessie Mone and Kieran Hughes and the reliable brilliance of McManus. Though Hughes and Mone were barely seen again after the first five minutes, McManus’s quality never dipped and he carried the fight to the end.

Monaghan needed to press home their luck at only being two points down at the break but instead Tyrone sprung from the traps on the restart. McCurry and McAliskey had three points on the board between them inside the opening six minutes of the second period and all of a sudden, Tyrone had a five-point lead.

In a face-off between two blanket defences five points was a canyon. McManus stuck at it and Owen Duffy came off the bench to land two gorgeous points but Tyrone came up with a response every time. Ronan McNamee and Ronan McNabb sallied forward from the back untouched to nail killer scores, Donnelly was imperious in tacking on a couple of his own. This was over from a long way out.

It ended with scores being settled all over the place but . Tyrone’s work was already done.

Bundee Aki: ‘When the videos came through of my family, there were goosebumps’

6:28 Ken Early: Blindsided by a glorious day of Euros football

Drug cheats in horseracing: If Jim Bolger is right it makes watchdog’s role all but untenable

12:50 Cristiano Ronaldo retains grip on the spotlight as age remains merely a number

1 Drug cheats in horseracing: If Jim Bolger is right it makes watchdog’s role all but untenable

3 Bundee Aki: ‘When the videos came through of my family, there were goosebumps’

5 Thomas Delaney: Dane with Irish name has eyes only for Russia

Georgie Kelly the hero as Bohs get one over on Shamrock Rovers 22:31
Ruthless Belgium beat Finland to make it three wins from three 22:21
Inspired Denmark blow Russia away to keep Euro 2020 dream alive 22:18
St Pat’s look convincing in win over Finn Harps 22:06
Bundee Aki: ‘When the videos came through of my family, there were goosebumps’ 22:00
Crossword Get access to over 6,000 interactive crosswords

Ken Early: Blindsided by a glorious day of Euros football

Drug cheats in horseracing: If Jim Bolger is right it makes watchdog’s role all but untenable