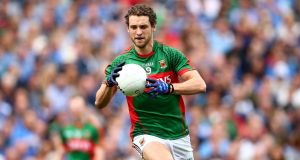 Tom Parsons: “We have a quick turnaround, we have Kerry at home, so this is forgotten straight away and we are back to square one.” Photo: Cathal Noonan/Inpho

For Mayo, it was important to come through a squeaker on Sunday. A win is a win is a win but beating Monaghan in Clones thanks to Robbie Hennelly’s two late frees came with layers of meaning attached. It arrested a run of three straight defeats, finally put one on the board for Stephen Rochford and, helpfully, came in a game that was level with five minutes to go. Bodes well, surely.

“Please God,” says Lee Keegan. “We’ll see. It’s all confidence-building but we lost our first three games so it has to be confidence-building. It’s important that we park it and move on because we have a big week of training coming up against Kerry.

“We’re still in a dogfight at the moment but we need another two points against Kerry. We don’t really have a target in terms of points, we just have go out and try to win every game. The way we look at it now, it’s championship time. Every game is kind of a knock-out. This is a huge momentum builder for us.”

“You can’t take any of these games for granted,” says Keegan.

“Monaghan went up to Dublin last week and probably should have won. Division One is so competitive, it’s a very good indicator of where you are come championship.

“Listen, we want to remain in Division One. That’s our focus. But we want to get big wins too and this was one of them.

“Kerry at home is always a big game and we always look forward to it. Hopefully we get another big one next week. We’ve had a bit of a trilogy with them over the past few years and even in the league, we’ve had great games against them. It’s definitely a game you look forward to.”

Mayo didn’t concede from play for the whole of the second half in Clones, reducing Monaghan to pot-shots from distance and only giving up scores from frees. For midfielder Tom Parsons, closing out a game like that is a sign of the lessons they’re learning.

“It is so vital now not to concede soft scores or goals at critical times in the game,” said Parsons.

“And that might mean being patient or not diving in or maybe not fouling around the edges. The Donegals and Monaghans are big kickers from 45 yards and you can’t give away frees in the same area either or they will execute. It is a big skill, you have to work on it in training.

“Have we learned lessons here from the past? For sure we have. Other teams have as well. If you look at the top teams now they can be defensive for five to 10 minutes out, even if the opposition is on the attack. That is the key. When you win, not everything is right and we will be analysing, looking at where we can improve for Kerry next week because you can be sure that Kerry will be a serious animal.”

For the team who have been longest in the top flight, hanging onto Division One status is a bit of a badge of identity. It isn’t uppermost in their minds by any means but, as Parsons says, it’s something they’re conscious of.

“Hugely. We have got a huge task. We are by no means still in Division One. A win next week is critical. Coming down here and getting two points means that we still only have two points from four games, but we have still a long way to go.

“This is Division One. It is championship football and it is getting to a higher and higher standard and the exertion levels involved are not a million miles off a championship game now. Every game is very competitive and you see teams are picking up points off everybody. Look we have this one in the bag, we have two points. We have a quick turnaround, we have Kerry at home, so this is forgotten straight away and we are back to square one.”