Tipperary roll over Galway to roll back time at Croke Park 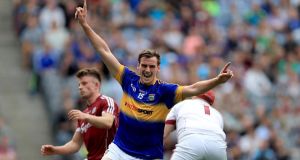 It’s hard to calibrate surprises and when a team is so emphatically superior in a match it can appear incongruous to dwell on the fact that they weren’t supposed to win in the first place. On Sunday in Croke Park, however, Tipperary footballers bridged history and climbed to an altitude unvisited in 81 years when they thrashed Galway in the GAA All-Ireland football quarter-final.

Of the four matches – between Saturday’s qualifiers and Sunday’s quarter-finals – on what was shaping up to be a predictable weekend the final fixture always held out the best promise of something different.

The weekend’s first three winners, Donegal, Mayo and Kerry, are All-Ireland mainstays in recent years but Galway, Connacht champions for the first time since 2008, arrived in the quarter-finals with an unexpected provincial title and high hopes after the impressive replay destruction of Roscommon but were essentially unproven at this level.

They had been drawn against a Division Three team, which had already staged a big surprise in Munster by beating Cork for the first time in 72 years but Tipperary had also been well beaten by Kerry in the Munster final. More to the point they had been ravaged this year by departures and an apparent loss of the youthful promise of an All-Ireland minor win five years ago and last year’s narrow under-21 final defeat by Tyrone.

Yet in classic qualifier fashion, Tipp had rebuilt themselves in the final qualifier round and the previous week’s breath-taking win over Derry confirmed their fettle but they were still outsiders in what – it must be remembered – was the county’s first football quarter-final.

They have also been very well assembled by an experienced manager Liam Kearns and retain enough quality from their great strides at under-age level to bring a robust confidence to the table even in the absence of roughly half the team that checked out of the championship last year in their final match against Tyrone.

This was an occasion when the winners simply flourished everywhere on the pitch and the losers wilted.

Tipperary’s defence was well organised with a perceptive and energetic sweeper, Brian Fox and simply excellent performances all around whether in the already recognised talent of corner back Ciarán McDonald or the powerful running from deep of the half backs which created all three goals: wing backs Bill Maher and Jimmy Feehan had assists for the second and third whereas centre back Robbie Kiely’s penetrating run was central to the first – and he kicked a great point to put them 11 ahead going into the final quarter.

They were also marking a well-regarded set of forwards but only Damien Comer and Danny Cummins survived the match without being replaced. At the time it would have been unthinkable but Galway arguably lost the match as early as the first quarter of an hour.

Up until then they had been calm, collected and accurate. Their defensive system crowded Tipp and forced some optimistic shot selection whereas their forwards were economy defined, kicking themselves three clear, 0-4 to 0-1 in the 14th minute. But they had already lost their best chance to take control.

Cummins was fractionally late to a ball whipped into the square by Eamon Brannigan in the 12th minute and then having wriggled free two minutes later, blazed the ball over the bar rather than under.

In the 17th minute Michael Quinlivan, who together with Conor Sweeney would go on to terrorise the Galway defence, reacted quickly to flick the ball into the net after George Hannigan’s snap shot after Kiely’s run had been saved by Bernard Power in the Galway goal.

A minute later Quinlivan shot a 13-metre free to put his team into a lead, 1-2 to 0-4, they never lost, as points flowed from the same player, Sweeney and Kevin O’Halloran whose score might as easily have been a goal.

Galway appeared in shock and their early composure shrivelled. There was a goal chance but captain Gary O’Donnell, up in attack, having expertly turned the defender, couldn’t get his shot away. Unexpectedly there came however a lifeline.

Paul Conroy won a kick-out – a rare occurrence in a centrefield contest dominated by Peter Acheson and Hannigan – and got the ball to Comer, who took on the defence and crashed in a fine goal to cut the half-time margin to three, 1-5 to 1-8.

This was an unexpected challenge for Tipp, exacerbated when Shane Walsh’s free on the resumption brought the deficit to two, but their response was as deeply impressive as Galway’s was curiously hollow.

Tipperary simply ramped up the pressure by maintaining their focus, continuing to win centrefield both on kick-outs and breaking ball and intensifying the attack.

Acheson played a captain’s role, relentlessly driving through the middle but there were support runners everywhere, Kiley particularly impressive, and Galway disintegrated. No sooner had one attack been cleared than another started. They had no ability to hold possession or supply any meaningful ball to Comer and Cummins up front.

Inevitably the roof fell in. After Walsh’s 36th-minute point Galway were out-scored in the third quarter by 2-4 to 0-1. Sweeney got both goals, the first in the 41st minute after Maher’s run and fisted pass, which he let run before steering it past Power and the desperate line of Declan Kyne, who played better than the wreckage of his defence might suggest but at the same time hardly enhanced his provincial championship All Star claims.

Six minutes later Sweeney got a touch on Feehan’s sky-high ball, as it dropped down on the square with all the menace of doodlebug. There could have been more. Quinlivan had drawn a good save from Power after Philip Austin had chipped the ball to Sweeney who had in turn found his full forward.

Acheson’s 56th-minute point after another rampaging run was deflected over the bar by Kyne.

Manager Kevin Walsh began to run the bench. Although his defence at this stage could have been used to strain potatoes all the changes came in attack where the team was equally desperately trying to make an impact – and two of the changes were forced by black cards for replacement Adrian Varley and Conroy.

Comer ploughed through four defenders to get a shot off in the 59th minute but it was saved. None of the replacements ignited the comeback and the Connacht champions were a forlorn sight by the end.

Tipperary just sped away over the horizon into a dream world in which they are just one match away from a first All-Ireland final since the aftermath of Bloody Sunday.