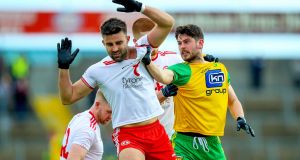 Tyrone defender Tiernan McCann has admitted that coming under a social media spotlight is “not easy” and has appealed for online critics to be “very careful of what they say’” about players.

Experienced McCann was retrospectively banned for two games last summer following an incident against Donegal and acknowledged he’s ‘no angel’.

His hand came in contact with the face of Donegal defender Stephen McMenamin during a grapple for possession in their Ulster semi-final tie and his boot also struck the back of McMenamin’s head.

It sparked a huge debate online with Sunday Game analysts later laying into the Killyclogher man who was also at the centre of a diving saga in 2015.

Back then, McCann was criticised for dropping dramatically to the Croke Park ground after his hair was ruffled by Monaghan’s Darren Hughes, who was dismissed, during their All-Ireland quarter-final tie.

McCann was apologetic after both incidents and said in an interview for Benetti Menswear that such storms have left him open to severe criticism on social media.

“It’s not easy, it’s definitely not easy, especially with Twitter and social media these days, there’s a platform there for people to say whatever they want,” said two-time Ulster medallist McCann. “It can be very, very difficult.

“It can be very difficult for a family, people can write anything, personal stuff. Even if you look on a broader scale, in terms of some of the recent celebrities, Love Island and people on a higher...a million scales above a GAA player and they’re getting hundreds of thousands of messages and you can understand why people are under so much anxiety and depression these days.

“I think there has to be a widespread conscious effort from people to be very careful of what they say. It’s only six or eight weeks ago that Caroline Flack took her own life, which was incredibly sad, over vile comments she was receiving online for a number of months.

“People have to be very, very careful. I’m not saying I’m an angel, far from it, but at times people have to take some sort of care over what they say online. And it’s not even me, I can take a lot of it but when you see your own family, your brothers and sisters getting very, very annoyed and people writing personal stuff about somebody they don’t even know, somebody they’ve seen a snippet of on the field and they think they know the person and don’t, that’s probably the most difficult thing to come to terms with. But I’ll have to learn.”

McCann, an All-Star nominee in 2017 and 2018 and All-Ireland finalist in 2018, referenced how former colleague Sean Cavanagh was forced to explain himself to a work client after being labelled a cheat for infamously dragging down Monaghan’s Conor McManus in 2013.

“He’s an amateur athlete, it should not affect your life,” said McCann. “It’s different if you’re Harry Kane and you’re getting two hundred thousand a week and it’s your job, and you’re acting in an unprofessional manner in a professional capacity. For somebody doing something as a hobby, as a sport, and dedicating a lot of their free time and dedicating a lot of things, it’s definitely not right, it’s definitely not fair.”

McCann is living in Tyrone again having commuted from Dublin for several seasons while working there. The pharmacist is currently working in Monaghan and finding travel arrangements much easier.

“Looking back now, I don’t know how I did it at times, honestly,” said McCann. “If I remember back, down in Dublin, how did I drive up these roads, it’s not even motorway bar 40 minutes of it. Thankfully I’m back home now but there’s lads still doing it, lads all over the country doing more than two-hour drives.”

McCann played in all five of Tyrone’s Allianz League games before the Covid-19 shutdown, starting against Meath, Kerry and Galway. He came on in the Round 5 win over Dublin in Omagh, a week after their heavy defeat to Galway.

McCann described their win-loss-win-loss-win campaign as “very up and down”.

“We went down to Galway and probably had the worst performance since I’ve been involved,” he said. “I think it was probably Mickey Harte’s greatest ever defeat. It was one of those days where everything went from bad to worse. Then we responded well with the win over Dublin in horrible conditions. That’s what I mean, we just struggle for consistency.”