The Rochford files: it’s about self-belief and trust in training 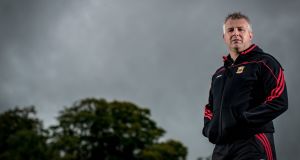 Mayo manager Stephen Rochford is in his first season at the helm. Photograph: Inpho

The most noticeable part of Stephen Rochford’s first year in the hottest of hot seats is just how easily he has blended into the background.

If Jim Gavin deftly deflects all attention towards his team, then Rochford has also mastered the art of presenting himself as a facilitator of his team’s needs.

He remained even-mannered through the testing early stages of the league when that elusive first win would not come. He betrayed no panic after the significant upset of the Galway defeat, and now that he has guided Mayo to an All-Ireland final, his demeanour remains the same.

Rochford’s notable success in managing Corofin to an All-Ireland club title propelled him to the first-choice list of Mayo managers.

Sunday will be his first time in a Mayo All-Ireland final dressing room. His players are no strangers to this place. The world and its mother has strong advice to offer on what Mayo need to do. So it won’t be difficult to come up with words for the occasion.

“No,” he agrees. “There is going to be a lot of people that will help me in relation to that. But look: that is words in print, it is past results, it is what an analyst says. It is opinion.

“At the end of the day we have to trust what we are doing in training, and what we believe would be the best way of presenting the team. The evidence has shown that the lads are committed and aligned to what our plans are.”

This was at the Mayo media evening. Earlier, when asked whether Mayo might push up on Stephen Cluxton’s kick-outs, Rochford cheerfully admitted that he would not be divulging specifics.

Anyone who heard him speaking on a frigid night in Corofin prior to their All-Ireland final will recall the same tone; low-key confidence, quiet self-assurance and a kind of iron-clad faith in his own team. You sense he has that about Mayo too.

“I think a lot of people will say that the team that beats Dublin will win the All-Ireland. They will be right.

“They have been the market leaders in performance and quality, and certainly in the trophy cabinet for the last number of years, and they have set the benchmark for the last four years in getting to a point whereby if you are beating Dublin you are playing at a very high level.”

When Mayo and Dublin met last year Rochford was a fan in the crowd for the first semi-final and did a turn on local radio for the replay.

This year he has a slightly more pressurised role. He bats all concerns and queries away with a confident stroke. No, he is not concerned about Mayo’s fullback position.

“It is not on our agenda. We will look to pick a defensive unit that will, hopefully, cope with what Dublin will bring.”

Yes, he expects a high-paced, forward-motion game because of the athleticism within both teams. And, no, he has not thought much about Croke Park essentially being Dublin’s home venue.

It’s all quietly positive, constructive commentary in theme and message. When Rochford speaks Mayo’s magnificently complicated relationship with All-Ireland finals doesn’t seem to matter so much. He breaks it down and presents what Mayo have to do not so much as mythic quest as a reasonable sporting feat.

“When you go into an All-Ireland final at any level it takes a fair journey to get there,” he says.

“The one message I will give the lads is that they have been here a number of times over the past few years. And let’s not have any regrets. We have put ourselves in a position to win the All-Ireland. That has been the aim all year. Building on that all year, redesigning our effort in the championship after been beaten by Galway.

“And now we are at the final hurdle, and it will take a massive effort to jump it. And rightly so. How else do you expect to win an All-Ireland if you are not going to take out the very best team? And that is the position we find ourselves.”