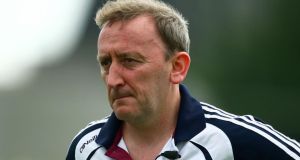 Sligo manager Pat Flanagan was unhappy at his side’s finishing in the All-Ireland SFC qualifieri against Limerick at Markievicz Park. Photograph: Ken Sutton/Inpho

Sligo substitutes Stephen Coen and James Kilcullen kept their team ticking over in a pulsating second half as the Yeatsmen booked their place in the next round of the All-Ireland Senior Football qualifiers after this two-point win over Limerick at Markievicz Park on Saturday.

Coen kept the home side ahead by the narrowest of margins with points at vital stages of the half whenever Limerick threatened, while Kilcullen put the hosts two points clear on the hour mark.

At the end of 70 minutes of pretty mediocre play by both sides, a relieved Sligo manager Pat Flanagan said: “ It’s hard to make sense of it, I thought we were the better team. We had an awful lot of possession and kicked 12 or 13 wides to three or four. It was a game that would have destroyed us if we did lose and certainly we were the better team on the day and fair play to Limerick they kept going and had a great opportunity of a goal near the end.

“Our finishing seems to be letting us down an awful lot in the last couple of games and it’s seriously disappointing. But on the plus side we were making the chances and that’s the good thing.

“It’s a testament to the players and the quality and work rate that they’re putting in, having been so disappointed with their performance against Galway, to come out and win two fairly tough games.”

Sligo swept into the attack from the start of the first half but some erratic shooting cost them a couple of early scores.

Limerick raised the first flag of the half when Ger Collins pointed from play after two minutes before goalkeeper Aiden Devanney levelled the match from a ’45 in the sixth minute.

Limerick netminder Brian Scanlon put the Munster men ahead, also from a ’45 on nine minutes as Sligo found the visitors’ defence more than a handful.

Adrian Marren put Sligo ahead after a minute of the second half but Limerick refused to yield and missed a great chance of a match winning goal in the closing minutes when Ryan’s clever ball caused panic in the home defence.

Limerick manager John Brudair said: “ We made hard work of the game for periods but there in the last five minutes we created a lot of scoring opportunities and we definitely could have gone to extra-time. In the first half we kicked the ball away at times but we tightened up in the second half, got into positions to get scores but didn’t take them.”