Sean Cavanagh confirms he will play for Tyrone next year 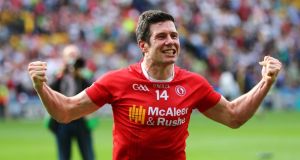 Tyrone’s Sean Cavanagh: “You get the feeling within the squad at the moment that there is success to be had, and that helps drive you on.” Photograph: INPHO/Cathal Noonan

Sean Cavanagh last night ended speculation over his future by confirming he will play for Tyrone next year. The 32-year-old former Footballer of the Year revealed he is ready to embark on a 14th season with the Red Hands.

Cavanagh said the pain he felt following the All-Ireland semi-final defeat to Kerry convinced him that he was not yet ready to call time on a sparkling career that has seen him win three Sam Maguire Cups and five All-Star awards.

“If injuries hold up, and the body holds up through the winter, and if I get the blessing from my wife Fionnuala, I’ll certainly look forward to committing in 2016,” he said.

“I have got to the stage where you review it every year, but at the same time my hunger certainly hasn’t diminished.”

In the immediate aftermath of last month’s loss to the Kingdom, Cavanagh cast doubt over his future, but a couple of weeks of reflection has reinforced his belief that the young team has a bright future. And the Tyrone captain feels he has a part to play in a renewed push for major titles next season.

“You get the feeling within the squad at the moment that there is success to be had, and that helps drive you on.

“It wasn’t a very hard team to lead at times, because guys that were 19, 20, 21 were driving the thing on, and whenever that happens it galvanises everyone, and it certainly has put us in a good position.”