Roscommon retain Connacht U21 after Tuam thriller against Galway 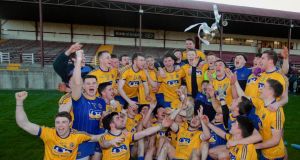 Roscommon celebrate their victory over Galway in the EirGrid Connacht under-21 Football Final at Tuam Stadium. Photograph: Mike Shaughnessy/Inpho

The upsurge in Roscommon football took another big step forward when they retained their Connacht under-21 title for the first time after a superb contest at Tuam Stadium.

It was a final which had everything between two teams whose main focus was on attacking football, providing wonderful entertainment for the crowd of 4,796.

Galway looked set to build a strong foundation when the excellent work by midfielder Michael Day helped create the opportunities which led to goals from Damien Comer and Enda Tierney to lead by five points after 16 minutes.

However, Roscommon did not panic and they got back in contention when Cathal Compton found the net eight minutes from half-time.

That helped them lead by 1-10 to 2-6 at the break, with both teams given a standing ovation by the crowd as they went off.

The pace of the contest did not relent on the resumption with Eamon Brannigan, Colin Brady and Tierney shooting points for Galway.

But Roscommon had a match-winner in Diarmuid Murtagh. He pointed to steady the ship and then shot to the net to put Roscommon into a lead they never surrendered after 44 minutes.

The champions struck another telling blow three minutes later when Enda Smith set up an opportunity which Paul Kenny fisted to the net to put them 3-11 to 2-9 in front.

Galway, though, did not give up and they ensured a tight finish when Brannigan blasted home a late goal to the top right corner but Roscommon held on for victory at the end of an enthralling contest.