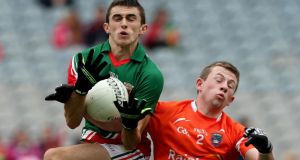 Defending All-Ireland minor football champions Mayo had no trouble booking their place in this year’s semi-finals after demolishing Armagh in Croke Park yesterday. The sides were level four times in the opening 20 minutes or so, but once the Connacht champions settled they made light work of the beaten Ulster finalists.

Fionán Duffy’s goal after 26 minutes put daylight between the teams and Mayo led 1-6 to 0-4 at half-time. Two goals from corner forward Brian Reape in the third quarter put the game to bed for Mayo, who will face the winners of today’s game between Kerry and Kildare in the semi-finals.

Mayo captain Cian Hanley was a big influence in the first half. He switched from centre forward to full forward and caused mayhem, setting up Duffy’s goal and a score for Barry Duffy as well as forcing a save from Armagh goalkeeper Ryan Kearney.

Armagh were static and went 13 minutes without a score either side of half-time before Caolan McConville ended their scoring drought in the 34th minute. Shane Conlon thought he’d added another point a minute later, but it was rescinded after the referee decided to review the play on Hawk-Eye. Brian Reape hit two goals in four minutes as Mayo coasted to victory.

He ghosted inside unmarked, collected a weighted fist pass over the top from Sean Conlon to fire the ball past Kearney in the 38th minute. Reape was again in the right place to fist home after 41 minutes to put Mayo 3-10 to 0-5 ahead and effectively kill the game.