Paul Mannion gets the ball rolling for Dublin 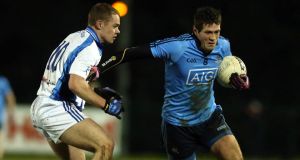 Gavin Burke of the Dubs Stars and Declan O’Mahony of Dublin at Round Towers. Photograph: Donall Farmer/Inpho

A brace of goals from Paul Mannion inside the opening four minutes propelled Dublin to a facile 25-point win over the Dubs Stars in their challenge match at the Round Tower Clondalkin grounds on Tuesday evening.

Some late withdrawals seriously depleted the Dubs Stars’ selection and they were duly punished as Mannion fired two sublime finishes beyond Sean Currie before the Kilmacud player added three points from play in quick succession.

Despite Ballymun’s Davey Byrne working tirelessly and intelligently to drag the Dubs Stars back into the hunt, their cause was practically lost as Ciarán Reddin netted from Declan O’Mahony’s pass at the end of the first quarter.

Mannion turned provider a minute later as Conor Walsh scored for a rampant Dublin side that finished the half strongly through points from Reddin, Jack McCaffrey and Walsh.

The Dubs Stars improved significantly in the second half and local player Eric Finn landed their first score from play in the 35th minute with Ryan Basquel also pointing as Alan Hubbard became increasingly influential. However, chances were still being created at the opposite end and substitute Paul Hudson produced a lively cameo for Dublin, hitting 1-4.

A sublime pass from Ciarán Dorney allowed his fellow St Vincent’s clubman Tomás Quinn to score in the 41st minute but Dublin reaffirmed their dominance as Philly Ryan scored their sixth and final goal soon after as Dublin enter next Sunday’s opening O’Byrne Cup tie against Westmeath in rude health.