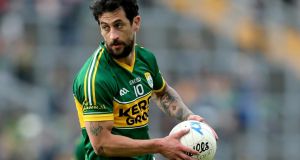 He’d hung up his boots, written his own book, gone and done the ring thing, and he’s not finished yet, Paul Galvin making perhaps the most unexpected U-turn in the history of Kerry football.

Because Kerry footballers don’t normally do this sort of thing, preferring to postpone their retirement as long as possible, rather than come out of it.

Yet there he was, last night, the 35-year-old Galvin back in the green and gold jersey with the Kerry seniors, as they played the county under-21 team, managed by Darragh Ó Sé, as part of an in-house (and behind-closed-door) challenge.

The rumour had been building momentum all day, yet still seemed unlikely – given the fact Galvin had been gone over a year, retiring just after Kerry’s opening game in the 2014 Allianz League, without the slightest hint of a return in the meantime. By close of business, however, manager Eamonn Fitzmaurice merely confirmed that Galvin had “resumed training this evening”, and suddenly everybody knew.

There is no guarantee, naturally, that Galvin will make it back on to the panel on a regular basis, although he’s clearly willing to give it a go – despite the ever-increasing competition for places, given the return this season of Tommy Walsh from Australia, plus the soon to be back from injury Colm “Gooch” Cooper, and the inspired again captain Kieran Donaghy.

Indeed Galvin’s decision to retire, interestingly, initially coincided with Cooper’s season-ending knee injury this time last year, and yet not even that tempted him to change his mind. Speaking to this newspaper at the time, Galvin said: “I don’t think I was emotional about it, really. It’s only a tough thing to do until you make the decision. Once you make that decision, it’s fine. It’s been fine since . . .”

The three-time All Star, and 2009 Footballer of the Year, had in fact considered retirement at the end of the 2013 season, before Fitzmaurice temporarily tempted him back with the prospect of a switch into centre back. Fitzmaurice also spoke late last year about Galvin’s enduringly fine conditioning: “He minds his body very well, lives like a monk.”

Galvin is not the first Kerry footballer to come out of retirement. Mike McCarthy, who originally closed up his shop after the outstanding display in the 2006 All-Ireland final win over Mayo, came back for more in 2009, although largely at the behest of then manager Jack O’Connor. McCarthy proved his worth by helping Kerry win that All-Ireland, then promptly retired again, only this time for good.

So the evolution of this Kerry team continues, only in ways few people ever expected.