Deserved win but determined Monaghan push them right to the wire 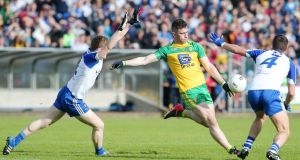 Donegal’s Patrick McBrearty gets his shot away as the Monaghan defence close on him during the Ulster SFC semi-final replay at Breffni Park. Photograph: Jonathan Porter/Inpho/Presseye/

Donegal’s appetite for conquering ever more worlds in Ulster won’t be sated for a while yet. For the sixth year in a row, they will head to the provincial decider in Clones after a semi-final in which they dangled just far enough out of Monaghan’s reach at all times.

Even if they find themselves falling short of adding a second All-Ireland, six finals in a row is no small feat – nobody has done it in Ulster since the great Down team of the 1960s.

They were unquestionably worth more than the one-point victory here but it’s apparently in the terms and conditions of this fixture that games between these sides come down to the last kick. Monaghan trailed all evening in front of a crowd of 17,174 but still had a chance deep into the 75th minute to force extra-time. But wing-back Kieran Duffy dropped his shot short from 35 metres out on the right and Donegal progressed.

Only for Donegal conceding two careless goals – one from Shane Carey after a quick free from Conor McManus, one from a McManus penalty after Ryan Wylie was fouled on the edge of the big square – the gap would have been unbridgeable going into the second half.

Malachy O’Rourke’s side stood off Donegal and allowed them to find countless pockets of space inside the scoring zone. Rory Kavanagh, Frank McGlynn and the excellent Martin O’Reilly promptly filled their boots.

The 0-10 conceded by Monaghan in that opening period was the biggest first-half total they’ve allowed in Ulster in five years. Indeed, you have to go all the way back to 2004 for the last time a Monaghan team gave up 10 scores of any hue in the opening half of an Ulster championship game.

O’Rourke agreed afterwards that they were lucky to be only 0-10 to 2-2 behind going in at the break.

“We probably were, yeah. The two goals kept us in the game because Donegal were playing the better football. But we always felt that even though we weren’t playing well, that if we could hang in the game, that things would turn. But overall we just never got going the way we’d have liked. Donegal played well and that’s just the way it goes.

Monaghan couldn’t be as bad again in the second half and on the off-chance that they might be, O’Rourke started to run the bench. Neil McAdam came on to block up the centre of the pitch, Dermot Malone got in around the breaks in the middle of the field to decent effect. Jack McCarron and Conor McCarthy brought energy and a fully functioning radar.

But Donegal are old hands at this. They kept their heads and kicked their frees and held Monaghan more or less at arm’s length throughout.

McBrearty and Murphy didn’t sparkle in open play but when the scoreboard needed rolling, they stood up and did their bit.

Mark McHugh came off the bench to land a monster score and O’Reilly, who was insinuating himself into the play time and again, helped himself to two more.

As ever between these two, it was nip and tuck all the way to the end. McManus potted a free and a 45 to keep Monaghan ticking, Murphy and O’Reilly hit back for Donegal. McCarron landed a couple of brilliant points and McCarthy almost scored the goal of the summer only to see his lob come back off the underside of the crossbar.

Colin Walshe brought it back to a point in injury-time but Donegal held out for a thoroughly deserved victory.

“It was a convincing display,” said Rory Gallagher afterwards. “I thought last week we were the better team and I thought we were this week as well by a good shot, but at the same time the admiration in our dressing-room for Monaghan is huge. They keep coming and coming and they don’t miss many chances.

“Probably missing a few chances last week stopped us from putting up a bigger score. We’d have been disappointed only to come away with 1-11 last week but we rectified a lot of that tonight without actually getting in on goal.”