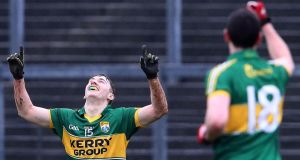 Kerry’s James O’Donoghue celebrates one of his three goals against Tyrone in Killarney on Sunday. Photograph: Inpho/Cathal Noonan

This was a game of one half. Kerry beat Tyrone by 3-7 to 0-1 over the closing 35 minutes to turn what had been a wholly engaging and perfectly level encounter into the worst defeat of Mickey Harte’s 13 seasons in charge.

It was like watching a tug-of-war match where the tape didn’t move an inch for ages before one side suddenly let go of the rope. Tyrone were left on their arses, Kerry shrugged with a sort of baffled delight.

James O’Donoghue helped himself to a second-half hat-trick. Bryan Sheehan, whose frees were the backbone of Kerry’s eight first-half points, knocked over another three to twist the knife.

Paul Geaney came off the bench to mark a game which had started with a minute’s silence for his mother – whose funeral was last Tuesday – with a point of his own and a clever pass for O’Donoghue’s final goal. And all the while, Tyrone were nowhere to be seen.

“I don’t think you could call it a bad day at the office,” said a visibly seething Harte afterwards. “It was something much worse than that. That’s a dreadful performance from our team. We were in the game at half-time and I didn’t anticipate that we wouldn’t be in it right until the end. When Kerry got their first goal and tagged on a few points it was always going to be a big challenge for us. But in all the time I’ve been dealing with Tyrone teams, I’ve never ever had a second half like that.

“And it’s just not good enough, simple as that. It’s just not a performance that anyone would be proud of. We can count our lucky blessings that we got the two points last week because if we didn’t and we put in that kind of performance there, we would be definitely relegation candidates. Not that we’re not that already.

Hard road
“It’s devastating. It’s just not what you expect from players in a Tyrone jersey. Collectively we were just so poor as to be unrecognisable. We have a long hard road and a hill to climb now if we’re going to regain some of the respect that we’ve earned over the past 10 or 12 years. It’s just a performance that will have to be forgotten as best we can but it will never be forgotten because it will always be there.”

Where it came from is anyone’s guess. Tyrone had held their own and more in the first half, with Peter Harte the stand-out performer in front of a crowd the PA announcer described as “close to 4,950”.

There was almost nothing to choose between the sides. Where Kerry had Sheehan’s frees, Tyrone had Niall Morgan’s. Where O’Donoghue was making Tyrone corner-back Barry Tierney’s life a misery, Darren McCurry was showing Shane Enright such a clean pair of heels that the Kerry defender was called ashore before he got himself in card trouble. A half-time scoreline of 0-8 to 0-8 felt right on the money.

Tyrone even landed the first score of the second half, a statement-of-intent sort of point inside a minute from sub Ciarán McGinley. Yet somehow, that was their last score of the game. They played the rest of the game as if in a daze.

Harte barely touched the ball again, Seán Cavanagh looked weary in at full-forward, half the starting forwards ended up on the sideline. And poor Tierney’s day went from bad to worse as O’Donoghue made merry. His first goal came on 45 minutes, a whipcrack finish past Morgan after he zipped onto a Sheehan knockdown.

Offered nothing
It put Kerry 1-11 to 0-9 ahead but, with 25 minutes to go, you wouldn’t have presumed Tyrone were done. Yet they offered nothing from there to the end.

Kerry tipped away with points from Sheehan (two), O’Donoghue, Geaney and Kieran O’Leary and the game drifted away from Tyrone like a barge that had lost its moorings. Kerry were nine ahead by the time O’Donoghue struck for his second goal and his hat-trick ran it up to 15. Considering how badly Kerry needed the points, it was impressive stuff.

“We trained well this week,” said Eamonn Fitzmaurice. “There was no despondency after last weekend and I had a good feeling coming in here. I knew we were in a good place today. No more than last week when I said Mayo got life when they took their chances, it was the same for us today. The goals in particular seemed to take a lot of energy out of the Tyrone challenge and we just looked stronger towards the end.”

So Kerry are on the board. Win in Newbridge this coming Sunday and they can start looking at semi-final possibilities. Tyrone are, by Harte’s admission, looking in the opposite direction now.