O’Connors to the fore as Ballintubber end Castlebar’s reign 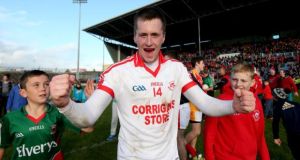 Peter Ford’s search for a county senior championship in his capacity as manager ended at blustery MacHale Park, Castlebar, where he turned the tables on his old club, and defending Mayo and Connacht champions, Castlebar Mitchels.

This is the third final Castlebar have lost to their great rivals as Ford, who was joint- manager on this occasion with Tony Duffy, lost as manager with Castlebar in 2011.

But he finally got his reward as Ballintubber, who had four of the O’Connor brothers playing (Cillian, Ruadhri, Padraic and Diarmuid), landed their third title in five years.

And the O’Connors played a key role in this victory as first-half goals from Pádraic and Cillian left Castlebar chasing a seven-point deficit after just eight minutes (2-1 to 0-2).

Both goals came from defensive errors and were finished with clinical precision, Pádraic fired low to the net after just four minutes and Cillian pounced n a mistake to rifle home from 20 yards after a mistake by Mayo defender Tom Cunniffe.

Mitchels narrowed the back the gap to two points at the interval with scores from Richie Feeney, Neill Lydon, Fergal Durkin and free from Eoghan O’Reilly to leave it 2-2 to 0-6 at the break.

A terrific point from Alan Dillon had the gap to three points before Barry Moran had Castlebar on level terms with a tap-in goal early into the second half. But Ballintubber’s Stephen Broderick, Pádraic O’Connor and Cillian O’Connor (free) nailed the scores, which finally brought secured victory.