Noel Connelly and Pat Holmes stand down as Mayo managers 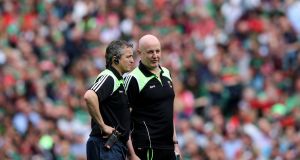 Noel Connelly and Pat Holmes have announced their decision to stand down as Mayo senior football managers. Photograph: Inpho

Mayo are on the hunt for new management for their senior football team after Pat Holmes and Noel Connelly have bowed to player pressure and resigned.

Five days after being informed that a majority of the panel had taken a vote of no confidence in them, Holmes and Connelly attended a meeting of the Mayo County Board Executive in Castlebar around seven o’clock. After first delivering a review of the season, they stepped down from their post and issued a statement in which they made it clear that they were going against their wishes.

“It is with heavy hearts that we wish to announce that we (Noel Connelly and Pat Holmes) are stepping down from our role as joint managers of the Mayo senior football team with immediate effect. We took on the job on a three-year basis and had been looking forward to building on what had been achieved this year.

“We are passionate about Mayo football and it is deeply disappointing not to complete our project. By resigning we wish to remove any obstacle that the players might perceive as preventing them from winning the All-Ireland.

Holmes and Connelly leave after one season in the job, despite reports earlier in the week that they were keen to dig their heels in even in the wake of the players’ vote. But any suggestion that the squad was split or potentially wavering was put to bed on Thursday night when they turned up en masse at a meeting with county chairman Mike Connelly and secretary Vincent Neary.

Originally, it was just the teams two player representatives Cillian O’Connor and Keith Higgins who were scheduled to meet the county board on Thursday night but when the whole squad arrived to back them up, it was taken as a show of unity and strength. It was the first item on the agenda on Friday’s meeting and once Neary and Mike Connelly reported back, Holmes and Noel Connelly joined the meeting and tendered their resignation.

The Mayo county board later issued a statement in which they thanked Holmes and Connelly for “their dedication, commitment and hard work over the last year”. It was also noted that the outgoing management received a standing ovation from the board, as well as sympathy for the difficult week they had endured.

With Holmes and Connelly gone, the ball is squarely back in the players’ court now. There has been no indication at any stage that the players have a preferred candidate to take over or that they expect or wish to be consulted. The current favourite is Stephen Rochford, manager of All-Ireland club champions Corofin.

Whether it is Rochford or James Horan or a different name entirely, the Connacht champions have strapped a weight to their backs now that only an All-Ireland title can lift. The 2016 championship has begun.