No tears, just a sense of overwhelming loss as 62-year wait becomes 63

‘Mayo really needs this, more than anyone in Dublin could understand’ 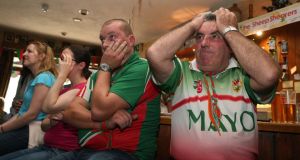 In the shadow of Maamtrasna mountain, overlooking Lough Nafooey, murderous oaths were muttered as Dublin players put pressure on Mayo.

It was just after half time, and there was much angst and apprehension in the Larches Bar, just beyond Finny village in the Mayo Gaeltacht.

Proprietor Brid Hopkins was pulling pints, serving sausages and craning to hear Seán Bán Breathnach’s commentary as Gaeilge when a goal was scored.

Demonic howls
Demonic howls of delight echoed across the lake to the top of Ceann Garbh mountain – “tá siad leibhéal!” – until there was a collective sigh as Dublin edged ahead again.

Wearing county jerseys or the nearest colour combination, the entire parish of Kilbride – or so it seemed – was sandwiched inside the hostelry just 100 metres from the Galway border.

The commentary was quadrophonic and bilingual – Brid relaying Seán Bán’s broadcast from her stereo radio, almost drowning out the RTÉ television team in the other bar, interspersed with cries of “mark the ball”, “keep at ’em” and “go-on-ya- go-on-ya Mhaigh Eo”.

“I can only think in Irish . . . but now I can’t even think with the tension and excitement,” Hopkins laughed, as she passed heaped plates of ham sandwiches over the counter, assisted by Cliona Kerrigan, a NUI Galway student, Irish dancer and Gaelic footballer from across the lake in Glentrague.

“Mayo really needs this, more than anyone in Dublin could understand,” Martina Flannery, whose late father John Coyne was the first owner of The Larches, explained during the lull at half time.

“The county is plagued by emigration, and yet there we are, able to hold Dublin to a point, without anything like the choice of players,” she said.

Migration is also a factor affecting this part of the county: Finny’s Gaelic footballers have to play in Galway, with Clonbur GAA. “We don’t even have our own school here, so you can imagine how hard it is to get a ticket to Croke Park,” Martina’s sister Eithne pointed out.

Holding their own
“We can still hold our own though,” said neighbour Jerry O’Donnell. Local footballer Trevor Lydon won an all-Ireland under-21 medal with Clonbur, he explained.

Timmy Conroy and Micky Lydon weren’t too worried about holding anything more than eyelids open, as both were just delighted to be home. Both men had flown into Knock airport several hours before, having been at a Liverpool-Southampton soccer match.

“Liverpool lost so we are hoping for better luck today,”they said. “But there have been too many wides in the first half.”

As the second half got under way, there were more roars, groans, cheers, applause.

Four minutes of extra time were awarded, and Brid turned up the radio, but the hunched shoulders and heads buried in hands told their own story, even as Seán Bán Breathnach’s voice cracked with the strain.

Then the whistle, the result. No tears, just a sense of overwhelming loss. “An rud is annamh is íontach,” said Eithne Coyne.

A neighbour nodded in agreement. “Sure we won the minors, and if we can wait 62 years for the seniors, there’s nothing wrong with 63.”