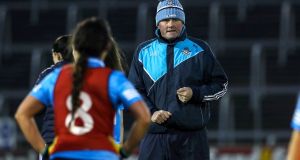 Mick Bohan has had good cause to feel proud of his players since he returned for his second spell as Dublin manager in time for the 2017 season. At that point they had lost three All-Ireland finals in a row to Cork. Since he came back they’ve won three on the trot, against Mayo, Cork and, last year, Galway.

Whatever happens, though, as they attempt to make it a four-in-a-row when they meet their trusty old rivals Cork in Sunday’s final, he insists he’s never been as proud of his players as he has been this year.

“Because it hasn’t been the same fun, there hasn’t been the same enjoyment,” he says. “All the things that make it a great experience for them, coming together an hour before training, having a chat, telling a joke, asking how people are getting on in work, sitting down after a match for a meal, having a yap - all that’s gone. Where’s their enjoyment? They’re literally only getting their training session on the field, and that’s it.

'Beating Cork in 2018 was massive. What was missing, what could still be thrown at them, was that they still hadn’t beaten Cork in a final'

“We went up the Dublin mountains for a night walk, purely to see if we could get a bit of laughter, for no other reason. That’s how it’s been different. Camp weekends, all that type of stuff that you normally have, that’s all gone, and they’re important in engendering a team spirit. But we’re lucky that these guys are a really tight group, friends a long, long time.

“So you have to take your hat off to all the players who have done it, across the country – in men’s and ladies’ football, in hurling and camogie. Ultimately, they’re putting on a show at the weekends for all of us, but it hasn’t been easy for them.”

And so unique has the year been, he believes this final will have a singular feel about it too. “I haven’t even thought about a four-in-a-row because this is a stand-alone fixture. This is a competition like no other – and please God may we never have to go through it again.

“I was thinking about it the last few weeks, is it the ‘Covid All-Ireland’? How are we going to refer back to this in years to come? We’re not going to call it the 2020 All-Ireland, we just won’t. None of us in our lifetimes ever experienced a year like this, none of the crew ever trained in a year like this before. It has been so individualistic in its make-up. That in itself sees it become a completely different competition. I honestly would write off anything that ever came before and put this in its own capsule. And if it was the virus, I’d send it to space.”

The sole slice of normality in the midst of all the strangeness is another year ending in an All-Ireland final – Dublin’s seventh in a row, their ninth in 12 years, and their fifth meeting with Cork in the last seven deciders.

“There’s nothing but respect between the two groups of players, and I have nothing but respect for [Cork manager] Ephie Fitzgerald. He’s a wise old owl, I’ve great time for him, he’s a rogue of the highest order. He’s led his troops really well, he’s rebuilt after losing a few of the old soldiers. I don’t think anyone is surprised to see Cork back in an All-Ireland final. Massive respect.

“On a personal level, I don’t have any history with Cork, but the girls who were there for those three losses in a row do. To get to three and lose them and come back again for more? Why would you keep putting yourself through this? It’s fantastic when you win, but it’s torture when you lose.

“So, beating Cork in 2018 was massive. What was missing, what could still be thrown at them, was that they still hadn’t beaten Cork in a final, that’s certainly something that sat with them. So I suppose 2018, for them, was just putting something to bed. I was very aware of the strain that was there for that period because it sat on the shoulders of the players, but only because Cork – 11 All Irelands in 12 years! – had set the bar as high as they had.”

“But this group has evolved. There was a stage when we were trying to figure things out for them, but we’re not doing that any more, they’ve taken that mantle on, that’s the growth of a team. There’s an incredible amount of knowledge in this group now, we look back to four years ago and there was silence in the dressing room, now there’s that lovely hum when they’re discussing things themselves. That’s fantastic. Proud of them.”