Monaghan at a loss to what went wrong

Malachy O’Rourke admits Tyrone were better side on the day 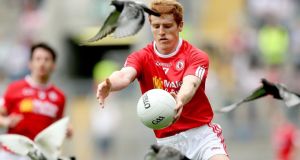 Not for the first time Tyrone have found themselves in an All-Ireland semi-final with a little dust kicked up in their tracks. As it clears, it doesn’t alter the end result, only perhaps something about the nature of it.

Two years ago, when Tyrone took out Monaghan at the same quarter-final stage, Seán Cavanagh rugby-tackled Conor McManus, preventing a near-certain goal: Cavanagh was yellow-carded, and later confessed he’d do the same again, if necessity demands.

This time, there was nothing necessary about Tiernan McCann’s sudden collapse, not long into the almost nine minutes of injury-time, when Monaghan’s Darren Hughes merely put his hand on McCann’s hair. Tyrone were four points clear, already into the semi-final.

Hughes was shown a straight red card and, although it didn’t impact on the end result, it did raise some concern over the apparently increasing prevalence of diving. Neither manager commented on the specifics of the incident, although Monaghan manager Malachy O’Rourke admitted he would be “disappointed” if McCann had fallen for nothing more than a pat on his hair.

“Towards the end, when people get desperate to win, sometimes the tackling does get a bit ragged, from both sides, and that was trying to stop the momentum as well. I suppose the black card was brought in to stop that, but it hasn’t really.”

Tyrone manager Mickey Harte didn’t comment on the specifics of the incident either, but also admitted that the discipline of both teams was tested towards the end: Monaghan also lost Paul Finley late on for two yellow cards, and Tyrone full back Ronan McNamee was also sent off on a second yellow.

“It probably was just a little frustration, spilling over,” said Harte. “It was a very intense game. The tackles were intense, from both teams. That was there to be seen. Players were being closed down, and it did get a bit unruly at the end, but that’s to be expected. The stakes were so high, and players just see a bit of redness.”

Indeed Harte was soon looking forward, not back, pondering his next opponents, with Kerry already waiting for them in the All-Ireland football semi-final on August 23rd: “Yes, Kerry again,” he admitted. Harte guided Tyrone to their last two All-Ireland titles, in 2008 and 2005, in both cases beating Kerry: they also beat Kerry in the 2003 All-Ireland semi-final. The counter-punch, for Kerry, was beating Tyrone in the 2012 qualifiers, in Killarney

“We had to be at our best here, and I think we were close to our best. We’ve been building nicely, through the qualifiers, and maybe the games we have been playing have served us very well.

“Now, whether we can improve or not, time will tell. But we will have to improve. Kerry are All-Ireland champions, have been around the block so many times, and that’s our challenge now. Kerry’s attack is a big strength of their team.”

For O’Rourke, Monaghan’s poor record in Croke Park remains, and that, as much as the result, left him baffled.

“I thought our preparation was very good, three weeks since the Ulster final, with all the boys fit and ready to. So I just can’t put my finger on it. It’s bitterly disappointing, but in fairness to Tyrone, they always had that bit of daylight between us. And anytime we got a point, they came back down the field and got one back. So we have to say the better team won, even if our boys fought until the end.”

O’Rourke wasn’t predicting any retirements, despite the age profile of players like Dick Clerkin and Paul Finley: “Well I would hope not, talking to them inside I’ll be saying that it’s not a day you want any rash decisions or retirements.”