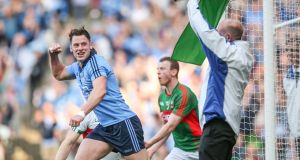 ‘Everyone remembers the goals in last year’s semi-final replay between Dublin and Mayo, an encounter memorably labelled by RTÉ’s Darragh Moloney as “the match that keeps on giving”.

Philly McMahon’s 57th-minute goal was identified in post-mortem as the fatal blow to Mayo’s All-Ireland hopes but the signs that it was coming were there as early as the 19th minute. Dublin initiated an attack in that period which resulted in a McMahon point.

It was the moment before the score that illuminated all of Mayo’s problems. During an enjoyable interview with the Off the Ball crew last week, Aidan O’Shea spoke of his admiration for Stephen Curry, point guard for the Golden State Warriors and currently the most riveting team-sportsman on the planet. Curry habitually manages to do to opposition teams what happened to Mayo last summer: he mesmerises and stupefies them with the ball.

In the 19th minute of last year’s semi-final replay, Bernard Brogan had possession around 30 metres out and eight Mayo players were between him and goal. Yet somehow McMahon managed to steal through completely unnoticed. Clearly, everyone was ball-watching.

Brogan chipped his pass over the Mayo cover. McMahon dropped the ball before collecting it, giving the Mayo defence the gift of a few crucial seconds to recover. Had he caught it first time, he was one-on-one with the Mayo goalkeeper.

Flash forward to the 57th minute. Dublin had just scored their first goal, through Brogan. Now they attacked again. McMahon, revelling in his outfield role, took possession and immediately handed off to Ciaran Kilkenny, who gave the ball to Brogan. Ger Cafferkey was breathing down Brogan’s neck and even though a really smart jab-step by the Dublin player gave him space to make inroads along the endline, there was no cause for alarm. Cafferkey had men inside for cover and there were two others in retreat.

McMahon only started to make his run when Brogan took possession and againhe was permitted to trot into the small rectangle unguarded. Everyone was sucked towards Brogan. Everyone was ball-watching – until it was played across the face of the goal for McMahon to bat home.

What looked like a shambolic disintegration of Mayo’s defence could have been avoided. All it required was one person to track McMahon. But like so many elite Gaelic football teams, Mayo were undone by believing that the guy with the ball is the danger man. The longer teams believe that, the more Dublin will win because they have perfected the elementary art of the give-and-go.

Those few seconds were central in the thinking of the Mayo players as they pushed for a change in management in the winter. The heave didn’t make them feel good but they thought it necessary.

It will be a shame if this particular group of players doesn’t win at least one All-Ireland. As O’Shea vouched, they are probably one of the best ever squads assembled in the county. “We’ve got huge running power, big physical size, good defenders and we put big scores on the board,” he said. “Like, nothing much had changed since the previous year. Our big problem was conceding goals and that continued to be our Achilles’ heel. We just kept doing the same things. But we felt we were slowly retreating instead of moving forward.”

However, goals were still a problem against Cork last week: two conceded and then there was Robbie Hennelly in goal, who was heroic. Now, for the second year running, the Dubs visit Castlebar town. A week ago, they cut Kerry open for all kinds of goal chances. But they were careless and you can bet Jim Gavin will have emphasised the importance of executing opportunity during the week. MacHale Park will be chocka but if Mayo are to beat Dublin this year, few expect to see it happen tonight.

It is going to take time for the new management team, headed by Stephen Rochford, to implement its vision. And it may get worse before it gets better.

“I don’t think there will be a panic,” says Martin Carney of the prospective attitude if Mayo lose their first two league games.

“They certainly wouldn’t like to see Dublin winning by a wide margin. I think people in Mayo realise that with injuries and bedding in a new manager you are not going to have an instant return from the new relationship. So if Mayo lose this weekend it won’t be a big surprise.

“But what people would like to see is a performance. They didn’t get that in Cork. And people are looking to see if some of the new lads put up their hands and demand a longer spell in the team. With the exception of Conor O’Shea, that didn’t really happen.”

At one stage, Mayo trailed Cork by 0-17 to 0-4, as good an indication of any that the league is not high-priority. Mayo are a seasoned team and it is no secret that winning an All-Ireland is the first and last point on their wish-list. The most economical way of doing that is to retain the Connacht title and get back in a quarter-final. But if they make the last eight, people will expect to see the new management team’s imprint.

“The style of football that would be favoured by Stephen Rochford and Tony McEntee would be one where there is a use of the foot pass as the primary means of transferring the ball,” says Carney.

“In the other regimes, it was very much a carry-and-run style. But to my mind one of the things they have to get into place very quickly is a defensive system that will stand up to scrutiny and that will actually stem the leakage.

League blows are never fatal. Every team can shake off what happens in the league, no matter how bad, and reinvent themselves in the championship.

Still, the memory of the Dublin-Mayo league game in Castlebar a year ago is fresh in the mind. It wasn’t quite a crisis moment for the management team of Pat Holmes and Noel Connelly. But there was no disguising what had happened as Dublin took Mayo for 2-18 to 0-10: they had been blown away. That seldom happens in MacHale Park. Seven of the Mayo scores were from frees. It was difficult to find a remotely positive angle.

Mayo weren’t alarmed. By the time they won their fifth Connacht title in a row, using Aidan O’Shea as a full forward as they destroyed Sligo in the final, that league defeat seemed irrelevant. After all, Mayo are the Division One habitués: they haven’t won the thing since 2001 but they are masters at comfortably surviving.

The peak of their 2015 campaign came on the Saturday evening when they dismantled Donegal in the quarter-final and made a convincing argument about their All-Ireland credentials.

But when it came down to it in those enthralling semi-final meetings, Dublin reaffirmed what they had discovered in the league match in Castlebar. They could score goals against Mayo.

Tonight, they will be eager to see if they can expose existing weaknesses in the Mayo set-up and remind all other contenders of their destructive potency as a goal-machine. This may not be a baptism of fire for Mayo’s new management but the sequence of games means that Stephen Rochford finds himself in the thick of it very quickly.

No manager would choose the current Dublin team as their first home game in charge. He chuckled at the prospect after the Cork defeat on Sunday and admitted that they will “try and plan very, very quickly” for the visit of the Dubs.

But planning for the Dubs is a season-long endeavour. By necessity, this season must be a slow-burner for Mayo.

Pádraig Harrington says Ryder Cup must go ahead in September 14:43
Allaho could be Ryanair bound after assured win at Thurles 14:13
Tadhg Furlong could be fit for Ireland’s Six Nations opener against Wales 13:18
Arsenal sign Real Madrid’s Martin Odegaard on loan 12:12
Sergio Garcia has his eyes set on September’s Ryder Cup 12:05
Crossword Get access to over 6,000 interactive crosswords