Mayo get the right answer when hard question is asked 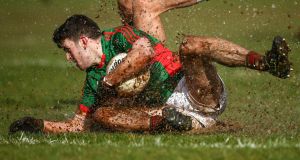 Even if Mayo’s record of having the longest unbroken stretch in the top division of the Allianz Football League is probably little more than a quiz question when to comes right down to it, they’ve given themselves every chance of extending it another year all the same.

Their 1-11 to 1-7 victory over Roscommon doesn’t guarantee them survival but they left Dr Hyde Park knowing that in all likelihood a win against Down in Castlebar next Sunday should see them safe.

The weekend’s doings in Division One didn’t decide very much of anything beyond the fact that Dublin will be in the semi-finals and Down will be relegated. Roscommon and Kerry should be okay for semi-final spots and after that it gets a bit tangled. Four teams are still technically in danger of falling through the trapdoor, albeit that Donegal would need to suffer a landslide defeat to get into any real peril.

Most in trouble are Monaghan, whose 1-17 to 1-9 defeat at home to Kerry means they’ve lost four in a row now, including crucial defeats to Mayo and Cork. They need to beat Donegal in Castleblayney next Sunday and hope that Kerry beat Cork to have any chance of staying in the division.

“From the start of the year we wanted to take very game on its own merits, like we did last year,” said Monaghan manager Malachy O’Rourke. “And if we did that, things will take care of themselves. I’m not sure if that will be the case after next weekend.

“But of course we know relegation is a distinct possibility unless we improve our performance big time. We want to stay in this division and that’s what we’ll be trying to do.”

For Mayo, the chink of light that first presented itself with the win in Clones three weeks ago has broadened now on the back of a dominant display against their near neighbours. They were much the better side in the Hyde and should have by more than the four-point margin. With Cillian O’Connor and Alan Dillon back in action, it was only good news for Stephen Rochford.

Knocking at the door

“People take an opinion that the end result is everything and yes, it is a results game,” said Rochford. “We went through the game against Dublin, Kerry and Donegal without getting any points but we played well at times in all of them. I felt that if we kept knocking at the door and got a bit of luck we’d take something. That’s what happened today. We needed to win the two points and thankfully that’s what we did.

“We couldn’t go looking at anybody else. I said earlier in the year about getting to six or seven points in the league. We won’t get to seven now, but we have the opportunity to get to six. No doubt Donegal and Monaghan will go at it themselves. We just have to win our game and see where that leaves us.”

One other line out of Roscommon was the lamentable state of the Dr Hyde Park pitch, which could have consequences for next Sunday’s league closer against Dublin. Roscommon and Mayo are due to meet in the Connacht under-21 final in the Hyde next Saturday night and Roscommon co-manager Fergal O’Donnell said afterwards that one of the game would definitely have to be moved from the venue.

Elsewhere, Tyrone’s draw with Armagh on Saturday night was enough to see them promoted from Division Two with a game to spare.

The other spot will go to either Galway or Cavan who face each other in a straight shoot-out at Breffni Park next week.

The relegations stakes will perm two from Laois, Meath, Armagh and Fermanagh – with the clash of Laois and Meath in Portlaoise particularly crucial.

In Division Three, Kildare’s comprehensive win over Tipperary on Saturday was enough to see them up and the second spot could be an epic dogfight.

Clare are in pole position on eight points but they have to go to Newbridge on Sunday and behind them, Longford, Offaly, Sligo and Tipperary are lined up on six points – with Tipp and Offaly having the head-to-head edge over them. Limerick are relegated but could be joined by Westmeath or any of that aforementioned foursome. Calculators at the ready.

Everything is a lot simpler in Division Four where Louth’s 0-13 to 0-11 win over Wexford clinched promotion for them alongside Antrim.