Mayo make it seven quarter-finals in a row; Peader Healy steps down as Cork boss 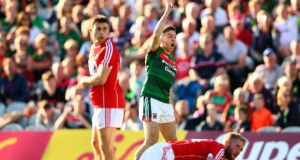 Mayo’s Evan Regan appeals after a point is waved wide during the All-Ireland SFC Round 4A Qualifier against Cork at the Gaelic Grounds in Limerick. Photograph: Cathal Noonan/Inpho

No one said it would be easy, and just when it seemed like the dream was over for another year, Mayo somehow found that inner belief again to fall over the line and into another All-Ireland football quarter-final.

That makes it their seventh successive year now reaching that stage, this time surviving a late, late test of their confidence and spirit and whatever else is still driving them these days. But to win by a point after extra-time and be there again is good enough for now.

Because just when it seemed too that Cork were playing for pride after the fall, they lifted spirits possibly beyond their own expectations – forcing the game into extra-time despite being down double scores midway through the first half.

In the 20 minutes of added time it seemed destiny couldn’t tear them apart, only for the O’Connor brothers – first Cillian, then Diarmuid – to finally open some space; Cillian finished with 0-11, four frees, plus one 45, playing a captain’s role in every sense.

Cork put up an incredible challenge however, Colm O’Neill’s impact off the bench just part of their surprise package, but they simply ran out of road and legs in the end – kicking two late wides which otherwise would have forced the replay.

Not bad considering Mayo were double scores up on the 46th minutes, 0-14 to 0-7, and it seemed had both feet in the quarter-final.

Then two goals from Seán Powter and Luke Connolly – in the 71st minute – helped wipe out much that advantage. Still it looked as if Mayo would fall over the line, Paddy Durcan sending over an excellent score with just one minute of the six minutes of added time remaining.

Only now Cork’s heads and tails were up – Mark Collins fouled just in the Mayo half, but it was brought forward for a bit of time wasted: up stepped Connolly cool as the breeze and the ball coasted over, bringing both teams back out for second helpings.

In the end though Mayo’s belief just about held intact, even as Cork hit the first score on extra-time. The relief was written all over Mayo players and supporters, as thoughts fast switch to their All-Ireland quarter-final date in Croke Park against either Kerry or Roscommon next Sunday.

Aidan O’Shea was making his 100th appearance for Mayo, between league and championship, which started as a teenager eight years ago – and as if on cue marked it with his best performance this summer. He started at midfield, then promptly moved to centre forward, and finished with 0-3. In the first half alone he set up three points, and scored one of his own

Back at the Gaelic Grounds where Mayo had died in their boots against Kerry in the All-Ireland semi-final three years ago, it turned out to be a contest of similarly epic proportions – one worry for Mayo being how quickly they can recover from the exertions of this.

The loss of Lee Keegan on a black card, on 58 minutes, certainly opened the scoring gates for Cork. Colm Boyle was taken off at that stage too, and without even trying too hard it seemed Cork were carving open the Mayo defence, looking as if they would score with every attacking move.

Overall then it wasn’t vintage Mayo by any means, but early on at least a team performance brimming with spirit nonetheless, even by the end every last ounce of confidence was tested.

It began a little taut, tense and at times tetchy, the crowd of 13,545 certainly weighed down in favour of Mayo. Cork lacked ideas and energy in the first half and it seemed interest too, only for that to change dramatically by the death.

Mayo took a while to find their feet but gradually out-played their opponents in every sector; Cork started out like a team desperate to win back some pride after their tame Munster final defeat to Kerry, and for a while at least found it.

Mayo slowly levelled, Andy Moran’s point on 18 minutes leaving it 0-4 apiece. Cork briefly rallied again, before the last 10 minutes of the half were all Mayo – a free from Cillian O’Connor, a sweet left footer from Jason Doherty, and another real crowd pleaser from O’Connor pushing them out three points clear at the break, 0-10 to 0-7.

Cork needed some change of fortune in the second half; instead they lost Aidan Walsh to an ankle injury in the throw-in, and for a while at least it seemed Cork hearts sank a little further.

By the time they scored their first point of the second half, a Donncha O’Connor free on 48 minutes, Mayo had already added four more – from Moran, two from Cillian O’Connor, and one from substitute Paddy Durcan.

Then out of the proverbial nowhere Cork found themselves back in the game, just one point in arrears: points from O’Connor and John O’Rourke closed the gap, before Powter’s brilliantly thunder-struck goal on 55 minutes made it 1-10 to Mayo’s 17 points. Another point from Tomás Clancy brought them back to the minimum – which at the same time set the alarm bells ringing for Mayo.

Cork continued to run at the Mayo defence, and the goal from Connolly certainly didn’t come against the run of play – creating a seismic shift in the mood of the game nonetheless, just now enough to shift the result in their favour, Mayo crawl forward, Cork wonder what might have been.

They will do so without manager Peader Healy, who announced he is stepping down after what he described as “a tough” two years in charge.