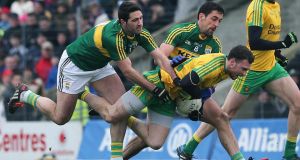 Martin McElhinney in action against Kerry’s Bryan Sheehan and Anthony Maher. “We are not safe. We have to go and put on a performance against Mayo and that is going to be hard without Michael Murphy.” Photo: Lorraine O’Sullivan/Inpho

Perhaps the most maligned bench in Division One football resides in the northwest of the country. The usual observation on Donegal is that they have no real squad depth and are reliant on a core of 16 or 17 players to carry them through a season. But it’s a theory that doesn’t sit all that well with the group of Donegal men waiting in the wings.

Martin McElhinney is in the curious position of sometimes starting and sometimes coming into games. He has seen life from both perspectives. A subtly invaluable presence during the McGuinness era who had a habit of chipping in with scores worth their weight in gold, the St Michael’s man played a part in Donegal’s three Ulster titles and came on as a sub in the All-Ireland final win of 2012.

With the retirement of Rory Kavanagh, his versatility around the middle third of the field becomes even more critical. On Sunday against Tyrone, he was up to his usual form, drafted in at short notice from the bench for Paddy McGrath and turning in the best performance on the pitch over 70 minutes, hitting two big points and constantly breaking the Tyrone cover to initiate Donegal attacks.

“But there are another five or six men to come on as well and in fairness, it is the whole team. People say that the Donegal panel isn’t that strong but in my opinion it is as strong as any. It is just about ticking over and gearing up for the championship in six weeks’ time. So who gets on doesn’t really matter.”

In a weekend when the new patterns of Gaelic football created controversy and hysterical comment, the latest Donegal-Tyrone instalment escaped critique by virtue of the fact that there were no cameras present. Both teams set up in their customary sweeping alignment but the day was dominated by the breeze as much as anything else. What was noticeable, though, was that the composition of both teams bore almost no resemblance to the match programmes. The goalkeepers stuck to their positions and both Donegal’s central defenders held their spots.

Everything else was a moveable feast. McElhinney grinned when asked where he felt that he was playing.

Even that was debatable; for long periods, Michael Murphy dominated the centre and was in murderous form. McElhinney though, had the most accurate radar of the day, claiming ball after ball and heading direct for goal.

“It is not something that I am really working on but I was just lucky enough to get on ball and be in the right position. You can’t really practice that...you just have to aware of those positions and it helps when you have strong runners coming off the ball like Michael Murphy and Christy Toye and Ryan a few times, you can lay the ball off to them.”

A tally of 1-13 wasn’t exactly record-breaking but after the 0-4 against Monaghan, it was a big improvement. The league has been defined by schizophrenic performances as teams try and balance their spring training regime with Sunday performances. It is a tricky task.

Nobody forecast such a one- sided win for Donegal against Tyrone and the generous score difference means that they have probably guaranteed another season in the top flight. Pending other results, they may even make the semi-finals. But if Donegal have been consistent in the championship over the last four years, they have bounced up and down the league tables and McElhinney sounded a note of caution ahead of their visit to Castlebar .

“We are not safe. We have to go and put on a performance against Mayo and that is going to be hard without Michael Murphy. He is only after hitting form and is on a suspension. So it is going to be tough. We are going down there to get the two points.

“A couple of years ago we got relegated by a last minute score and we don’t want that to happen again.”

Munster were fever-tested when they arrived in Italy 01:00
Crunch time for Connacht as they chase Pro14 dream to South Africa 01:00
Pep Guardiola believes Man City deserve some luck in Europe 22:30
Barcelona nab away goal after going behind in Naples 22:19
Bayern Munich teach youthful Chelsea a European lesson 22:08
Crossword Get access to over 6,000 interactive crosswords