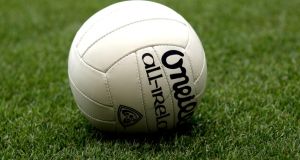 An ice-cool Seamus Ó Muircheartaigh held his nerve and drilled a 60th-minute free that ensured his side Pobalscoil Chorca Dhuibhne’s four in a row Corn Uí Mhuirí dreams are still alive. Seán Powter had put Rochestown a point in front a minute earlier in an absorbing Munster Colleges Final, played at Dr Crokes Grounds, Killarney, on Saturday afternoon.

It was a game that both sides enjoyed periods of dominance, with Corcha Dhuibhne’s Kerry minors Marc O Connor, Tom O’Sullivan, Brian Ó Beaglaíoch and Conor Geaney prominent, as they led 1-4 to 0-5 at the interval.

Three unanswered points from Geaney (2) and Martin Gorman, in the opening five minutes of the second half saw Chorca Dhuibhne move 1-7 to 0-5 clear and it appeared curtains for Rochestown, who last week lost the Harty Cup hurling final.

But driven on by superb wingback Powter, Rochestown staged a remarkable comeback. A fisted 47th-minute goal from Ciarán Cormack levelled the contest at 1-7 apiece and then the Dingle side responded to move two points clear. But back came Rochestown, Shane Kingston getting his radar right and levelling the contest with two minutes left.

Then it appeared the inspirational Powter had pointed Rochestown into the history books. However, Chorca Dhuibhne won a free 45 metres out and from the ground, Seamus Ó Muircheartaigh planted the ball unerringly straight over the bar and so the sides must meet again on March 8th.

Haaland hits the ground running with hat-trick on debut 17:44
Defi Du Seuil confirms the form with Un De Sceaux at Ascot 17:28
Man City slip up at home to Cyrstal Palace 17:29
Shane Long ends drought but Southampton lose out 17:18
Walsh leads from the front for Galway 17:03
Crossword Get access to over 6,000 interactive crosswords