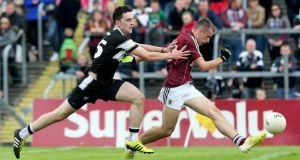 At stages in the game Galway looked as if they couldn’t score: they shot wide after wide until eventually McDaid took his chance.

Sligo, bidding for their first provincial minor title since 1947, should have put the game beyond doubt in the final quarter but they couldn’t.

Galway looked out on their feet, as Aidan Rooney’s Sligo side sat deep and soaked up the pressure.

However, Sligo relied far too heavily on the fluke goal from Patrick O’Connor in the first-half.

Rooney, who has been involved with this team since they were an under-14 development squad, wasn’t happy with his troops.

“We are blessed, we are just after saying a good prayer here – we got out of jail.

“We played terribly below ourselves, I am very disappointed with the performance of the team.”

Sligo surprised Roscommon in the Connacht semi-final and came into this game also as the underdogs.

However, they led 1-2 to 0-3 at half-time even though they won the toss and chose to play against the breeze.

Full back and captain Eddie McGuinness was a rock in defence and was one of the major factors for Galway’s high wide count. They shot nine wides in a poor first-half.

Colm Ó Braonain gave them the lead after six minutes and Finian Ó Laoi made it 0-2 to 0-0.

But Sligo probed well, with Liam Gaughan the main threat up front, and he got their first point after 13 minutes.

O’Connor boomed in a high ball from the left touchline. Galway goalkeeper Ronan Ó Beolain fumbled the ball and it squirmed under his body.

That gave Sligo a 1-2 to 0-3 lead at the break and Gaughan got his third from a free shortly after the restart to put three points between the teams.

Ó Laoi hit back with a point to bring Galway back into the game, before Darragh Cummins fired over Sligo’s final score in the 39th minute.

Galway only managed three further scores in the final-quarter and manager Stephen Joyce knew they had been lucky.

“I am disappointed in a way and also happy in another way.

“We weren’t playing well. We did create a lot of chances, we had a lot of possession but we didn’t take the scores.

“It looked for a while as if it wasn’t going to be our day, so we are happy to come away with a draw,” said Joyce.