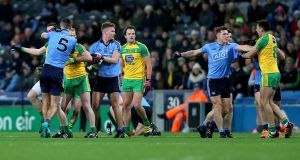 Tempers flare during the second half of the Dublin v Donegal game at Croke Park that led to to both Donegal’s Michael Murphy and Dublin’s James McCarthy to be sent off for receiving second yellow cards. Photograph: Donall Farmer/Inpho

There were further signs at Croke Park on Saturday that Dublin footballers are becoming more resistant to the tactics of ultra-defence. They certainly got a strong inoculation from Donegal, who reprised the approach of the 2011 All-Ireland semi-final by keeping virtually everyone behind the ball in front of a crowd of 23,340.

So pronounced was this pattern that at one stage 29 players were within one of the 45s and just before half-time Ryan McHugh sprang onto a turnover ball and streaked away only to find none of his team-mates were within 50 metres of him.

Dublin won because they showed the patience necessary to absorb Donegal’s best shots and create enough space for scores. They led narrowly ahead at the break having played into a strong wind, and ultimately wore the opposition down in a final half-hour that saw the holders outscore the visitors by 1-5 to 0-1.

Dublin manager Jim Gavin was asked did he think it had been entertaining viewing.

“No. I wouldn’t say it’s a pretty game to watch at all,” he said.” “It’s not the way we play the game, not by choice. There is no right and wrong way to play Gaelic football. Teams decide on it themselves. We’ve a particular way of playing football in Dublin. It’s expressive and creative . . .”

His Donegal counterpart Rory Gallagher denied that they had deliberately set out to turn the match into a crowd scene with a lavish budget.

“If defenders are pushing up – we don’t set out to have 15 back. Yes we’d a few men back and Patrick and Leo were inside and ended up chasing their own men back. Dublin committed 15 into our half and it’s not as if we’re going to leave their men free.”

The match turned away from Donegal in the 51st minute when Michael Murphy was sent off for a second yellow card after a sliding tackle on Ciarán Kilkenny. James McCarthy joined him for his role in the melee that followed.

Dublin will anxiously await the report of referee Conor Lane to see if McCarthy received his second yellow for the McElhinney incident – in which case it will be deemed to have been dealt with – or if Croke Park’s CCCC decide the matter warrants further investigation.

“We need to have a look on tape,” said Gavin when asked about the sending-off. ”

Gallagher said that there had been no reaction to the incident in the Donegal dressing-room. “I didn’t see anything and none of our players are complaining about anything. Definitely not.”

McCarthy has been playing well this season but Donegal lost more in the dismissals, losing their talisman Murphy.

That 66th-minute goal effectively ended the contest, as Donegal had struggled despite Patrick McBrearty’s efforts and the relentless running of Ryan McHugh to chase the three-point leads that Dublin had twice built.

Dublin can be pleased with performances of Brian Fenton at centrefield, who broke through to point a definite goal chance in the 55th minute, and Ciarán Kilkenny who played an energetic role at both ends in his side’s cause.