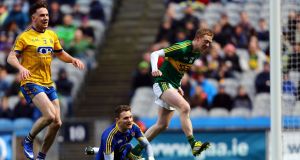 They say semi-finals are all about winning but Kerry obviously wanted a little more than that here, crushing Roscommon’s challenge early on and promptly turning a contest into a classical exhibition.

It puts Kerry back into the Allianz Football League final for the first time since 2009, the year they also doubled up in winning the All-Ireland: in this sort of mood there’s no doubt they’ve similar intentions this year.

Three first half goals for Kerry sent Roscommon into damage-limitation mode. Trailing by 12 points at half-time, they raised the inevitable rally in the second half but in the end still found themselves staring down the barrel of a 10-point defeat.

On days like this though very few teams can stay with Kerry, the scary thing is they’re not yet at full strength either. It’s as if they’re getting better with every game and while they may not have learned a whole lot from this they’ll have gained plenty more confidence.

For Roscommon in made for a slightly traumatic end to their otherwise memorable run through division one: maybe not bullied but unquestionably bossed, Kerry also showed some of Roscommon’s limitations in the process, certainly in front of goal.

They went 22 minutes before scoring from play, by which point Kerry had hit 1-6. Colm “Gooch” Cooper was showing a ferocious appetite for possession, and deftly finished Kerry’s first goal after 13 minutes, Stephen O’Brien’s neat pass sent left-footed by Cooper into the Roscommon net with unstoppable force and precision. Cooper finished with 1-5.

Donnchadh Walsh added a second goal on 28 minutes, set up by David Moran, and again there wasn’t a whole lot the Roscommon defence could do to stop it.

Darran O’Sullivan then added their third goal just before the break, this time after Roscommon corner back Sean McDermott misjudged a high ball. O’Sullivan was in ruthless form though and finished with 1-4, all from play, and the worthy man of the match.

Early on Roscommon also found the physical Johnny Buckley near uncontainable, as he both moved the ball around, and moved himself into scoring position, sending over a terrific point on 16 minutes. Four minutes later however Buckley did limp gingerly off with an ankle injury, Bryan Sheehan coming in as the replacement, himself just back from a hand injury.

Into the second half then, which started with Kerry 3-8 to 0-5 in front, and eventually Roscommon found a little more of their groove. Diarmuid Murtagh added their second point from play on 52 minutes, and Conor Devaney followed up with another, although was as good as it got. They finished up with a series of wides when they could actually have clawed quite a bit back on Kerry.

Still, by then Kerry’s job was neatly and thoroughly completed, and if anything they eased off in the last quarter, letting Roscommon off with a heavy defeat but perhaps a good lesson as well. If they do get back to Croke Park later in the year they’ll know a lot more about what it takes to stop a team like Kerry in full flight.