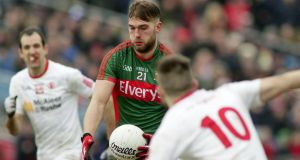 Mayo’s Aidan O’Shea has gone well in an advanced role during the Allianz League Division One campaign to date. Photograph: Inpho

Today Matches at 7.0 unless stated

Division One
Mayo v Dublin, Elverys MacHale Park, (Live Setanta 1, 7.0) – The counties have had some of the most noteworthy league encounters of recent years, among them big wins, comebacks and abandonment due to fog. Under Jim Gavin Dublin are unbeaten in competitive matches against Mayo. The four matches in question were however played in Croke Park and this is Gavin’s first trip to Castlebar where Dublin have one win in the past 23 years – that coming in 2010.

Both sides struggled with Tyrone’s lock-down strategies but last week Dublin’s difficulties were also at the other end where they managed to allow the opposition’s sporadic forwards extraordinary space and tackled poorly. Mayo are missing Cillian O’Connor with injury but Aidan O’Shea has gone well in an advanced role and Alan Freeman returns. Of more significance might be the fact Mayo are boasting the meanest defence in the top division. Dublin’s wins in this fixture have been accompanied by a couple of goals a match. Facing a tighter rearguard they might struggle, as the Tyrone match showed. Verdict: Mayo

Division Two
Meath v Laois, Páirc Tailteann (Setanta) – Laois found the wherewithal last week to bounce back after some poor displays and hand Roscommon a first defeat of the campaign. Meath’s clinically-taken goals the last day maintained disguised ongoing injury problems at centrefield, which Laois pair John O’Loughlin and Brendan Quigley can exploit. Overall though, the home side have looked steadier this campaign and more resourceful when things go against them. Verdict: Meath

Tomorrow Matches at 2.0 unless stated

Division One
Kerry v Donegal, Stack Park (TG4)– Both of last September’s All-Ireland finalists had nightmare matches last weekend, each scoring just three-points worth in the second half of their defeats against Cork and Monaghan, respectively. For Kerry the issues were more at the back and both Peter Crowley and Killian Young return as starters tomorrow to tighten things up. Paul Geaney is back in attack after a hip injury kept him out of the Cork match. Donegal manager Rory Gallagher is putting last week down to a bad day at the office with just one change to the team – Hugh McFadden replacing Eamonn Doherty. Verdict: Kerry.

Tyrone v Cork, Healy Park, 2.30 – For all the fright of their 15-man defence, Tyrone actually created plenty of scoring opportunities against Dublin and the most pressing problem was poor finishing. Had that been addressed they’d have been comfortable beyond the reach of Dean Rock’s goal. Cork were set up by Kerry leaving the gate wide open but when they’re going well there’s an efficiency about their score taking - Colm O’Neill is top gun in the entire league - that makes even massed defence difficult. Verdict: Cork.

Monaghan v Derry, Clones, 2.30 – Although the 5,000 or so present in Letterkenny last week swear never to speak of it again, the minimalist win over Donegal was a great result for Monaghan, who had lost Conor McManus to a black card after just 25 minutes and were missing the suspended Ryan Wylie. Derry will obviously still be without the Slaughtneil players just days before the All-Ireland club final but their performances have picked up in the past two matches and although they are bottom of the table on just one point Brian McIver’s team could have taken four points against Tyrone and Mayo had they enjoyed better luck. Fortune may favour them tomorrow. Verdict: Derry.

Division Two
Kildare v Roscommon, St Conleth’s Park – Kildare sprang to life in a cranky match in Cavan last week after a poor first half during which they acquired a man advantage from the end of the first quarter. They were ultimately value for a good win whereas Roscommon took an unexpected hiding from unfancied Laois and whereas they can be expected to respond, Jason Ryan’s team now have the bit between their teeth. Verdict: Kildare

Galway v Cavan, Pearse Stadium, 12.45 – Opening for the county hurlers on tomorrow’s double bill, Galway will want to rebound after a first defeat last week, which came agonisingly in the last seconds after they had led well early on against Down. Cavan are developing problems with two straight defeats, poor discipline and descending pessimism. All of Galway’s forwards scored from play against Down and it’s hard to see the visitors keeping up with that productivity. Verdict: Galway.

Westmeath v Down, Cusack Park, 2.30 – The walloping by Meath looks worse than it was and Westmeath were more competitive than the 11-point margin suggests. Relocating earlier form is none the less important but the visit of the leaders and division’s top scorers mightn’t be the best place to start. Down have also shown a bit of gumption along the way and should maintain the promotion push. Verdict: Down.

Division Three
Clare v Armagh, Cusack Park – Dropping a point against Fermanagh wasn’t expected but it hardly breaks Armagh’s stride, as they head for promotion after what will likely be a mercifully brief sojourn in this division. Clare’s defeat in Thurles was disappointingly comprehensive and this doesn’t look bouncing-back material. Verdict: Armagh

Fermanagh v Limerick, Brewster Park – What had been a decent season for Peter McGrath’s Fermanagh became a probable promotion-winning one with the draw against Armagh. Limerick lost to a last-minute point in Wexford but don’t look equipped to take something here. Verdict: Fermanagh.

Louth v Tipperary, Gaelic Grounds, Drogheda –Louth are another of the teams looking to expiate a dire performance last week, the 17-point drubbing in Sligo. Tipp may a bit down-hearted by the promotion race getting beyond them but they can win this. Verdict: Tipperary.

Sligo v Wexford, Markievicz Park, 2.30 – Both teams snapped out of losing runs last week but Sligo’s re-awakening was more impressive. Wexford could as easily have lost and their finishing remains patchy. Verdict: Sligo.

Division Four
Offaly v Carlow, O’Connor Park – Blowing an eight-point half-time lead against Leitrim will surely haunt Offaly although they managed to salvage a draw. Carlow are also unbeaten after an encouraging season to date but chances are that will change tomorrow. Verdict: Offaly.

Wicklow v Longford, Aughrim – Longford are joint top of the table and will expect to take the points at a venue not the fortress it once was even if Wicklow should have ended Carlow’s unbeaten run last week. Verdict: Longford.

Waterford v Antrim, Walsh Park, 2.30 – Antrim’s uncertain start to the campaign has left them playing catch-up. They should win here but don’t have home advantage in the potentially decisive final fixture against Offaly. Verdict: Antrim.