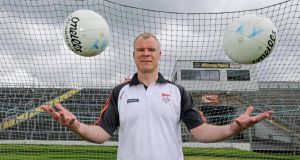 “I think Stephen Cluxton has been the best goalkeeper over the last 20 years, without a shadow of a doubt,” says Diarmuid Murphy. If Kerry are to beat Dublin in Sunday’s football final showdown then Cluxton’s influence will need to be curtailed in some way, and no one knows that better than Murphy.

As a four-time All-Ireland-winning goalkeeper himself, Murphy – a Kerry selector since 2011 – understands exactly how influential Cluxton can be, especially when it comes to kick-outs: if Cluxton gets his way Dublin may be impossible to stop.

“In the restarts, he has taken it on to another level, especially when the kick-out from the 14 came in, a few years ago,” says Murphy. “That made a huge difference, rather than the kick-outs from the edge of the small square.

“Because you are restarting every time from the same place, it’s easier to get set-plays in motion then. And Cluxton has been leading the charge in that regard. His performance levels day in and day out have been very, very high. To be performing consistently at that level for [such a long] period of time is an outstanding achievement.”

Murphy won the last of his four All-Irelands with Kerry in 2009, yet he admits the art of goalkeeping has changed.

“I think there is more emphasis on the kick-outs now, and on retaining possession from kick-outs. A lot of that has to do with the defensive set-ups of teams, because teams now seem to be overloaded with backs against forwards. In the past, it was six against six, so it was hard to work those kicks to space.

“Now you could have eight or nine backs against three or four forwards, so if you are going about your business right, you can retain possession much more easily.”

One of Kerry’s traditional strengths has been kicking the ball out towards the middle of the field and they certainly haven’t abandoned that yet. Nor have Dublin. Mayo were criticised for not pushing up further on Cluxton’s kick-outs for the replay, although Murphy doesn’t believe that’s the reason they lost.

“If you look at the Dublin team and fellas like Denis Bastick and Brian Fenton, who is having an outstanding year, and Michael Darragh Macauley, they are all well able to catch balls over their heads as well if the occasion arose.”

What Kerry also have to worry about is the difficult task of winning back-to-back All-Irelands. Murphy attained it with Kerry, in 2006 and 2007, but reckons that doesn’t have any bearing on Sunday.

“I suppose our situation down here, to be quite honest about it, is that we’re expected to win the All-Ireland every year. And if you’re not doing it, it’s a failure. So I think we are putting ourselves under pressure more so than maybe the supporters or the public to do well this year.

“And of course Dublin got the better of us the last couple of times we played them in the championship, and it’s been in the fairly recent past as well.

“But coming into an All-Ireland final, our fellas don’t need any extra motivation to what they have already. No more than the Kilkenny fellas last weekend, players are just expected to perform.”

There is one obvious difference to Kerry’s own goalkeeping this year in that Brendan Kealy has now nailed down the number one jersey, after Brian Kelly held it for most of last year. “We’re just lucky really that we have two such quality goalkeepers in our squad,” says Murphy.

“I suppose Brian is unlucky really that Brendan got his chance and he took it, and is playing well.

“But if anything were to happen or if we needed to change it for whatever reason, we could do so, because we have such a good and experienced goalkeeper in Brian to come back in.”