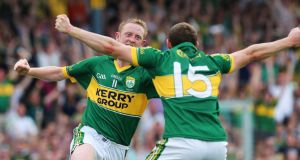 Kerry 1-16 Cork 0-17: It wasn’t quite as convincing as it once threatened to be but Kerry have won back the Munster football title, beating old rivals Cork at a packed and hot Fitzgerald Stadium, in front of a virtual capacity of 36,370.

The warning signs were there from the start as Kerry opened up with far greater pace, and space – breaking into scoring positions with impressive ease. Darran O’Sullivan quickly justified his selection ahead of Kieran Donaghy, with Declan O’Sullivan and James O’Donoghue also scoring sweet points from play – before Colm “Gooch” rattled the net on 30 minutes, helping Kerry 1-10 to 0-6 half-time advantage.

Cork were the defending Munster champions, but were seeking their first win over Kerry in the final since 2008 – and first win in Killarney since 1995. Perhaps motivated by that stat they rallied in the second half, points from Brian Hurley, James Loughrey and Aidan Walsh – and three frees from Daniel Goulding – reducing the gap back to three points, 1-14 to 0-14, with just five minutes to play.

Cork might well have snatched a draw when Hurley’s last gasp shot in front of goal forced a good save from Brendan Kealy, and a late 45-metre free for Goulding, but there was no denying Kerry in the end, clearly the better team on the day.