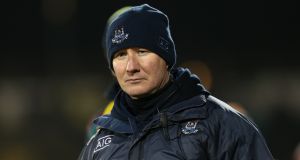 Jim Gavin: “When I’m asked by other counties I encourage them to get on to Croke Park: make their business case for funding for people.” Photograph: Andrew Paton/Inpho

Dublin senior football manager Jim Gavin has offered a spirited defence of heavy financial investment by the GAA in the development of Gaelic games in the county and has urged other counties to make their case to improve their funding allocation.

Last week’s annual GAA financial report for 2014 confirmed that Dublin had received €1.34 million for games development, more than the other 31 counties combined.

That financial clout, allied to the pre-eminence of the senior football team and the obvious advantage in population has led to predictions Dublin will overwhelm their competitors.

However, Gavin believes the funding is necessary for the wellbeing of Gaelic games in the city and suburbs.

“The intelligent thing that Dublin GAA did is invest in people. And that’s what they are doing. There is very little capital investment going on in Dublin clubs at the moment. The county board, with that funding, matches it on parity – there’s a 50:50 split. The bedrock of the association is volunteerism. I was out with my young fella, the under-eights and the games promotion officer was there.

“He was co-ordinating five coaches with the 20 kids that were there. Myself and the other guys were all volunteering our time – you need someone to co-ordinate it.

“Having experienced Cumann na mBuncsoil, there is still a cohort of teachers there to promote Gaelic games in our schools but the realit’y is that that is beginning to wane. There is a battle ground being fought by the Gaelic Athletic Association in Dublin.

“There are plenty of other outdoor activities that kids can get involved in. We want them to play Gaelic games. It’s no different here in Castlebar than in Clondalkin. We need to get out there and invest in our people.”

Within the space of a decade, the emphasis has shifted from the need to safeguard the welfare of Gaelic games in the capital to the fear that other counties will not be able to cope with the success of Dublin’s strategy. Gavin acknowledged some of the figures quoted – Longford, who recently defeated Dublin in the O’Byrne Cup received a figure of €39,000 – before offering what he sees as a solution, suggesting that the best model is to merge the traditional pillar of volunteerism with a streamlined business plan at county-board level.

“I just think that Dublin GAA have gone about it smartly. When I’m asked by other counties I encourage them to get on to Croke Park: make their business case for funding for people.

“I said that the club chairman needs to put a business plan together, get on to county board officials, make the case to Croke Park and demand . . . there’s plenty of funding coming in to Croke Park – we saw the big attendances that are there. They need to put their vision to Croke Park, get a games promotion officer into Longford, into the clubs, and promote the game.”

The rewards for Dublin’s vision is generally viewed through All-Ireland senior hurling and football success. They are favourites to retain the football title.

“One of the aims of the Gaelic athletic association is to promote and foster Gaelic games,” Gavin argued.

“We’re very fortunate in the county of Dublin that we have got some bright and forward thinking and visionary executives on the management committee. They’ve had a long term plan. They had to present it to the finance committee that is represented by all counties and they had to sell their business plan for Gaelic games in Dublin.”