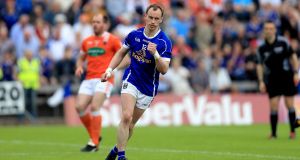 Cavan’s Martin Reilly wheels away after scoring a penalty in his side’s win over Armagh. Photograph: Inpho

Be in no doubt, there is another voice for the choir in Ulster. Cavan aren’t anyone’s favourites for the northern championship just yet but this ultimately facile eight-point win over Armagh made it clear that whoever beats them will have turned up with their Sunday best to do so.

Cavan are a multi-faceted side now, solid at the back, busy around the middle, confident in front of goal.

They can go Black Death when they feel like it, don’t worry about that. But when they break out of defence, they do it like they overheard the opposition talking about their mother. Tyrone can be assured they will get their fill of it on June 19th.

Nobody coming away from Breffni Park could be confused about which of these teams is headed for Division One next year and which has Division Three on the horizon.

Cavan are a team going places – vibrant, dynamic, very obviously clear in their heads as to what they’re about. Armagh, not so much.

Cavan had eight different scorers, Armagh had three. Five of the Cavan forwards finished the day with a score against their name, three of Armagh’s were gone by half-time.

It all added up to Cavan’s biggest win in the Ulster championship since 1995 and their biggest win over Armagh since 1962.

Kieran McGeeney declined to be interviewed by RTÉ afterwards, telling Joanne Cantwell that he wasn’t a big fan of their TV show.

Whatever quarrel he has on that score is the least of his worries.

Already missing the likes of Kevin Dyas and Jamie Clarke, he’ll have to do without Ethan Rafferty next time out as the midfielder broke his hand here.

Rafferty had been a bright spot in an otherwise grim enough first half for Armagh.

Cavan started as they meant to go on, Seánie Johnston landing a bomb with his first look at goal to mark his return to the Cavan colours after five years of attending to other matters.

If there is anything lingering over to his sojourn in Kildare, the gleeful harooing that greeted his opener meant it was in short supply here.

Johnston went on to have a fine game, ending up with 0-7 against his name, 0-3 of it from play. And yet he was arguably not even on the shortlist for man of the match.

Martin Reilly chipped in with a penalty taken as coolly as you’d expect from a former Ireland underage soccer cap but beyond that, he was everywhere.

Conor Moynagh oozed class as a roving centre back and Gearóid McKiernan was a driving force at centre forward. Cian Mackey and Dara McVeety got through an ocean of work too.

Sliced through McVeety finished it to an empty net after Reilly sliced through the Armagh defence and sold goalkeeper Paul Courtney a dummy that left him on his backside.

If anything, Cavan should have been further ahead at the break and when Tony Kernan drilled the point of the day just after the restart to reduce the margin to four, Armagh weren’t without hope.

Stefan Campbell carried the fight for Armagh more or less on his own from that point on.

He gave Killian Clarke a bit of a chasing at full forward, putting up three points from play in the second half and keeping them just about within shouting distance.

But any chance of a competitive endgame turned on two penalties.

Cavan’s came six minutes into the half, when the irrepressible Mackey was fouled in the act of shooting.

Reilly’s finish put Cavan 2-11 to 0-9 ahead and more or less finished the game off.

Campbell kept plugging away at the other end though and when Clarke fouled him for an Armagh penalty on 56 minutes, he had a chance to bring Armagh back to within three points. Easily saved

Sadly, his penalty was the worst thing he did all day, a low effort down the middle easily saved by Ray Galligan.

Just to kill the day, Cavan went straight up the other end of the pitch with Mackey feeding Johnston and the returning hero splitting the posts to a huge roar.

By the end, it was clear that McGeeney’s side were playing with very little confidence, an assertion with which the Armagh manager wasn’t of a mind to quibble.

”It would be [fair to say that]. When you’re playing football you’re trying to take calculated risks against a counter-attacking team.

“You never want them to be that paralysed by making a mistake that they don’t see those gaps and openings.  “But that is an inner thing. See if we’d taken that penalty, then all of a sudden everyone else is prepared to take that bit more of a risk to push up.

“For that 10 or 12 minutes before that, we were really pushing hard.

“We were coming off the shoulder, then you miss the penalty and the air is taken out of the bag a little bit.

“Confidence probably is short a wee bit, but that comes with winning. I think they’re good enough to get there but I’m sure I’ll hear about it over the next couple of days.”